Cuttings from epiphytic ficus for bonsai or Ficus the Lazarus tree

Epiphytes are plants that start their lives on top of something that is not the ground. Most commonly they grow on top of other trees. I have seen some grow on cracks in walls and on freeway overpasses. You might be familiar with orchids, bromeliads, and tillandsia all of which are epiphytes. This post will be about Ficus microcarpa, or the Chinese banyan tree.  Fig trees are known the world over as strangler trees. A bird eats a fig, and then poops on a tree. Some seeds germinate. The plants get their nourishment and water from moisture and dirt that collects in the crevices where it grows. They are not parasitic organisms. These plants will slowly grow a root down the tree until it touches the ground. When this happens the epiphytes growth explodes surpassing the growth of the host tree. Eventually the epiphytic Ficus will shade the host tree weakening it. The host tree eventually dies leaving the Ficus.

Here in sunny southern California we do not get a lot of rain. This keeps the epiphytic Ficus from getting to a relatively large size. The exception is this massive palm tree growing in the crotch of this blood tree.

My office faces this Italian stone pine. I have worked in my office for thirteen years. The grounds keepers will cut and poison this Ficus every other year. The branches are long and slender from last year’s growth. The trunk however is thick and covered in scars. I do not harvest this Ficus because the plant has wedged itself between the trunks and has an amoeba like shape, and that is no bueno.

This is my favorite cutting tool for collecting these Ficus.  It’s a Gerber saw, and it works great. Later on you will see how straight this saw cuts.

This is the prize of the day. I noticed it last year. It is a Ficus microcarpa var. green mound. The leaves grow oval and dark green. It really is a beautiful tree. I had collected some of its branches last year. They are all doing great. Now that we have hot weather again I decided to collect this tree. Now, I call the Ficus the Lazarus tree because it is very hard to kill. I have had Ficus that I have left for dead, I stopped watering them. After it rains some months later they start sprouting green buds. I collected a ficus that was growing on a sheer granite face. It boggles me as to how it survived on smooth granite. I wonder what it clung on to. I removed it and took it home. All the leaves fell, the branches dried. I put it to the side to discard later and forgot all about it. Months later after a rain storm I saw green buds growing. It was amazing. I was going to throw it away. 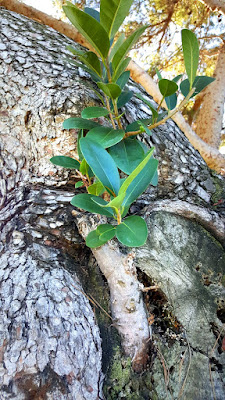 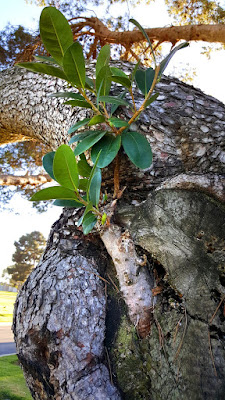 Anywho, back to business. This Ficus was growing from the inside of the tree out.  I placed the saw as low as I could. The wood was very soft. The saw cut through with no problem.  I placed the cutting in a container with some water.  Notice the size of the trunk? Even at this size the tree will survive and may probably not lose any of its leaves. What other species of tree can do this? Much respect for the Ficus, Rastafari-Haile Selassie. 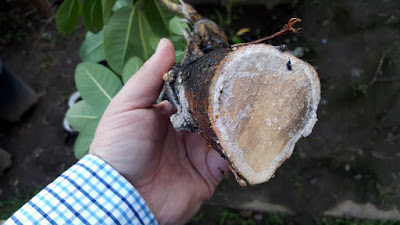 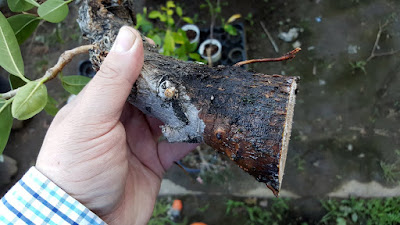 This is what the tree looks like outside of the tree. There have been times when with a little pressure the whole tree gives and comes off in one piece. This was not one of those trees. 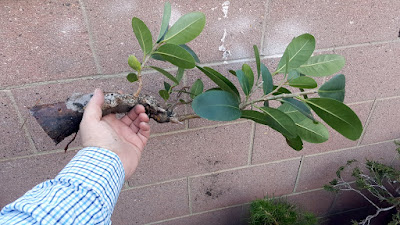 This was a second tree harvested. It had great taper and aerial roots. 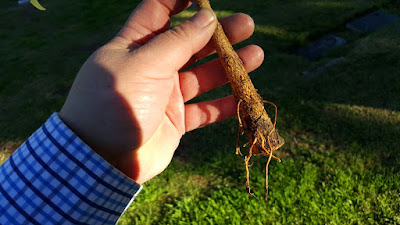 So, cutting the tree is half of the job. Now the cuttings have to root so that they can start growing again. To do this I put them in bark. I get the bark used for planting orchids. It makes sense to me as they are both epiphytes. I tried using just water. Using just water is a slow process that results in weak roots. I have used an only perlite medium, but the results are not as good as bark. I place the cutting deep enough so that when I add more bark the tree can stand on its own. Both of the cuttings I collected had aerial roots.  This might encourage roots to grown from the bark as well as from the wound. That is totally fine with me. I love the banyan bonsai look. After topping the pot with bark water thoroughly. One thing I have never been able to do is overwater a Ficus that is in bark medium. I have watered Ficus in bark medium up to three times a day for weeks. There was no negative result. 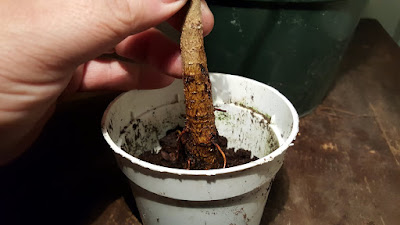 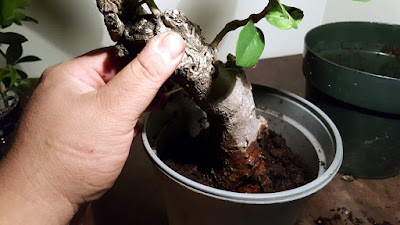 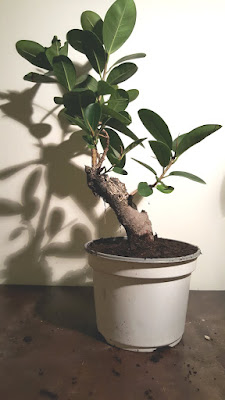 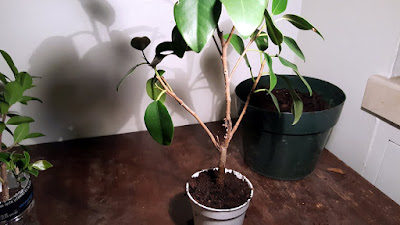 This is a tree I collected last year. It was growing on a palm tree. It has many scars from when the grounds keepers tried to kill it. I cut it off and brought it home. I see a lot of promise in this tree.

Thank you for coming with me on this adventure. I enjoy making these posts. I want to send shout outs to the reader here in the States. Also, to the horticulturalists in Germany and India, thank you for reading my posts. Cheers.

One of my friends said he likes it when I show before and after pictures. I do too. That was a very good idea. I wanted to show a cutting of a ficus microcarpa with a two and a half inch trunk three months after I appropriated it.


Two months after the picture above was taken there is an explosion of new growth.

I am tempted to cut it back. I want some of the branches to get pretty thick so I won't, for now.

This is my longest cutting. it measures above two feet. I cut it a month ago and it is doing great. 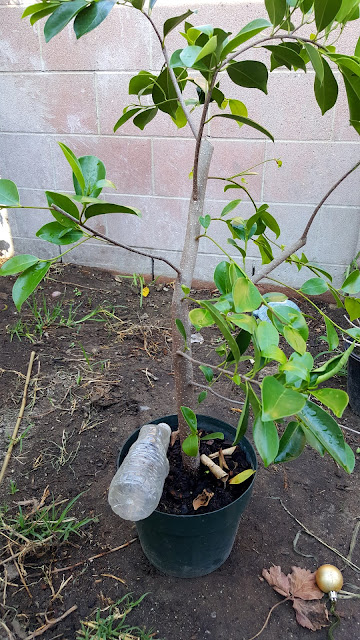 Posted by bonsai-misadventures at 10:18 AM