Leaving wire on a tree for too long

It's important to wire trees so that you get the right shape in the branches. Some people think that wire should be removed before it leaves a mark on the branches, and other people will tell you to leave the wire until it bites into the branch. I believe that they are both right, it just depends on the type of species that you're dealing with. For example a pine tree is a slow growing tree and if you wire it you might leave the wire on for a year maybe two years depending on the size of the tree and it might not leave that much of a scar. However, if you leave it on longer the branch will grow around the wire leaving a mark. That mark will take a long time to heal. Now a Juniper or a ficus grow very fast and he can have bite marks on a branch in just a month or two in the summer. Those bite marks will heal in a month or two. The benefit of leaving the wire until it leaves a mark on the branch is the surety of knowing that the branch will retain it's shape. The plant will heal fast. See, a problem with wiring is removing the wire too soon. Removing the wire early does not give the branch time to retain the desired shape. If you remove the wire early then you will have to rewire again and leave it on for another while.

Here is one of my trees. It is a ficus. you can see that it has bite marks of varying depth. This is so because the wire had more pressure on the parts that I bent. 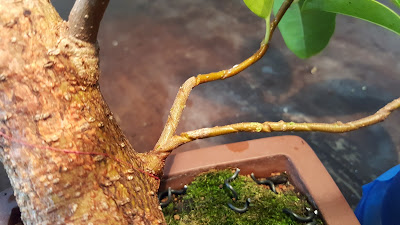 See the wire on this branch? It's flush with the branch. That means that the branch has grown around the wire and is pretty deep. It shouldn't get this deep. Still this is a ficus so in a month it'll grow back and there'll be some discoloration and in two months after that will be gone. To safely remove the wire i used a pair of wire cutters. Snip along the branch try to cut the wire along the same line. This will make removing the wire easier. You should be able to remove the wire with gentle pressure. If the bit of wire does not come off then cut it at the halfway point. 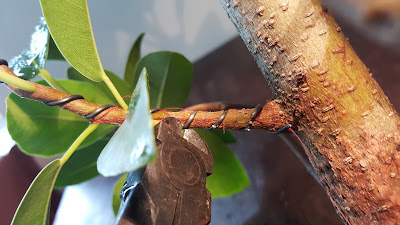 This is another branch. you can see that it also has wires scarring. I had to rewire it, but if you notice I wrapped it around the other way so the wire wouldn't fill the scars in. 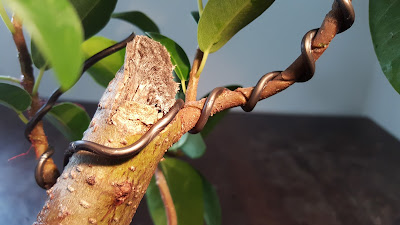 Oh, by the way. This ficus was an epiphyte the grounds keepers hacked last year. When I collected it, it had no branches or leaves. Now it has amazing huge leaves and it is developing branches. I just noticed from the picture above that it is time to remove the dead wood and give it a nice smooth and tapered look. Cheers.

Twenty seven days after I removed the wire the tree is healing nicely. 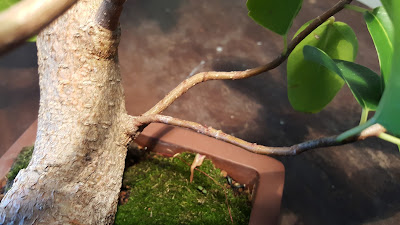 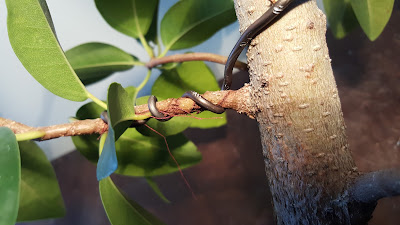 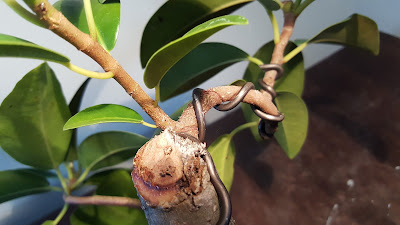 One more month and the wire scars will be all but gone.

Posted by bonsai-misadventures at 7:41 AM