Aerial roots when you live in a desert.

What are some features that you like on bonsai trees? I love aerial roots on ficus trees. They start out thin, but when they bury themselves in the soil they get fat quick. They add lots of character to the tree. 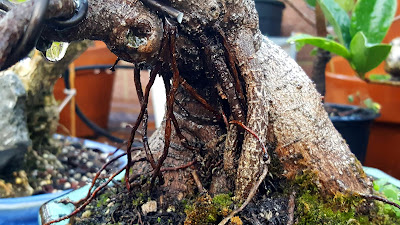 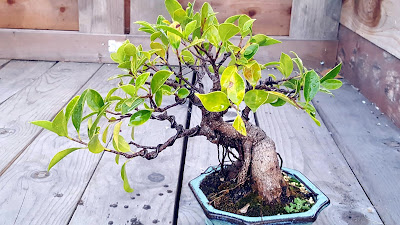 To be frank, growing aerial roots was a mystery to me. Sometimes I would see them grow on some of my Ficusses. Then one day after a heat wave killed some of my trees I decided to install a “drip irrigation” system. They actually make sprinklers in 180 degrees, 90, and 45-degree heads. I installed what you might call an overkill of sprinkler heads. I did not want to lose any tree to thirst.

I turned the sprinklers daily. Instead of mostly the soil getting wet the sprinklers would wet everything. I am talking about the leaves, trunks, and all. Also the brick wall, the wood stands, and the ground soil. I was changing the microclimate. Where I keep my trees I have little to no wind. It’s like a little alcove.

After about 4 weeks I noticed that some of my ficusses had a bunch of aerial roots coming from the trunk.

That is how I stumbled upon aerial roots. 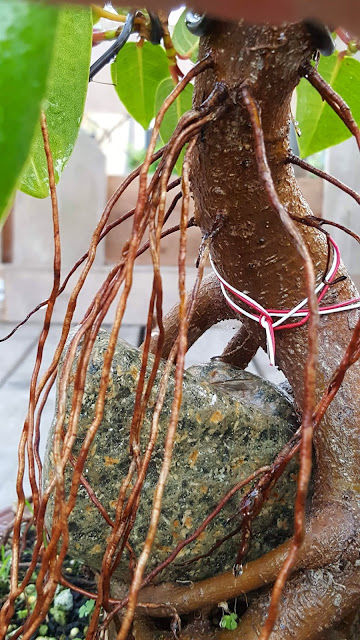 I had seen pictures of Scandinavian ficus bonsai. They are kept in grow bags. That is a plastic square bags with artificial humidity and light. The winters are harsh up there. Also, daylight in winter is very short. They keep these “exotic” trees in these bags to protect them. Because the humidity is high and the temperature in the bag is relatively high the ficus produce aerial roots. The roots were few though.

In fact, when I saw that I was going to make a mini greenhouse out of wood and clear plastic to try and replicate it. 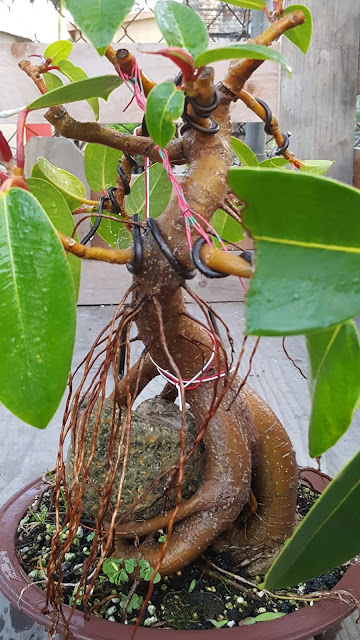 I live in Los Angeles, CA. We have had some very warm summers and wet winters (wet for LA, don't laugh at us Seattle) the last few years. The rain was not enough and when it did rain the temperature was too low to do much ariel root growing.

The summers were hot enough but because LA is at the edge of a desert it was never humid enough.

I want to emphasize that the roots were not growing from the branches. Not every Ficus produced aerial roots and not every tree that made aerial roots produced the same amount.  Even among the same species namely ficus microcarpa, there were differences. I never use straws to grow the aerial roots. They will not "dry out" if they get wet every day.

What can help make aerial roots?:


You might have noticed that most of the aerial roots like to grow on the underside of lateral parts of the tree. The underside.

Cheers
Posted by bonsai-misadventures at 12:00 AM