When I was a kid I hated this plant. I hated its smell, its coarse leaves, and that sphere of green and blue berries it left. When I started bonsai i read that Lantana made great indoor bonsai. However, because of my prejudices i would not consider that species as possible bonsai material for my collection. Then one day i was looking at plants at one of my favorite nurseries when i found the discounted section. There I saw a lantana with amazing taper and these itty bitty leaves. It changed the way I saw Lantana forever.
So, last weekend I saw this little tree:
The price for this tree was almost $7 U.S. I do not have a lot of disposable income. The more inexpensive I can get a tree the better. I am the first to admit that the branching needs tremendous amounts of work, but the trunk at least to me is superb. The trunk has a nice thickness that tapers and curves. I am picturing broom style for this tree.
This is a close up looking down at the tree at an angle. I love those knobby places on the trunk. Lantana are considered weeds in some places. They are fast growers if well watered and fertilized. If planted in the ground and established they can be drought tolerant. By the end of this growing season this tree should have good ramification. Ramification is when you have branches, then you have smaller branches growing on those, and even smaller branches growing on those. This helps reduce leaf size, and gives the tree a good silhouette.
After I see new growth I will prune the tree to the desired length ad watch it grow. Cheers.

Here is the tree three months later. I have cut it back once a month and fertilize it every two weeks. It has very little ramification and that is what I will be working on. However, as you can see it has a lot of foliage and the placement is much better. 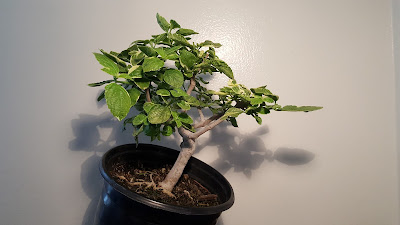 Well, This little tree has come a long way. Not only has it changed its appearance, but it has survived calamity. In july as I was watering the garden the hose fell on it breaking off the apex. Then a recent heat wave almost defoliated the whole tree.

I was going to give it away as a gift. I couldn't because of these setbacks. Yet a month later the growth was so much that I had to cut it back. Even with constant pruning the branches had grown too big. I cut off about one fourth of the overall size. Now two months after I snapped the apex I have this:

I bought this little tree which measures now about ten inches for six U.S. and change. It needs a bit more to go. It will be potted in a ceramic pot next late february. Here is a picture for my friend Luke:

I started working on this tree in february. It has come a long way in eight months.


Posted by bonsai-misadventures at 9:42 AM