Kapok the silk tree, pre bonsai experiments on a tropical

I have always collected seeds. wherever I went if i saw fruiting trees I have tried to take some seeds home. Sometimes they would not germinate. In the early days of the internet information was not as readably available. Now, information is limited by one’s imagination. There is stratification, scarification, dormancy, etc. Each plant has its prerequisite for germination. There is one plant that I have had one hundred percent germination. That plant is the Kapok. The kapok is a tropical plant that can grow 230 feet tall. It has buttressing roots that are tall enough to hide a person. It is a very impressive tree. I have searched for kapok bonsai on the information super highway to no avail. Well I found one example, but i crave more.

Last year I collected kapok seeds from a tree at work. One year later and the results are incredible.


The growth rate was amazing. The trunk taper was phenomenal. This was looking to be a very interesting bonsai. After a year they have not lignified. I have wired them a bit. I have noticed because they are soft and grow so fast you have to keep an eye on the wiring. Let the wire bite into it a bit. The wire scar will heal very fast. Be vigilant though.

The saplings grow a palmate leaf that grows from the trunk. They look like a branch and leaves. However, the whole “branch” falls off after a while. The tree kept growing, and the leaves kept falling. There were no branches. I decided to nip it in the bud. I cut the growing tip and hoped that the plant would force branches out of the place where its leaves had left a scar. My gamble paid off and the tree started to grow branches.

Here I wired a kapok in semi cascade style, han-kengai. It so happens to be one of my favorite styles. The trunk is green, so it is super malleable. I am very excited to see this tree develop in the next two years. 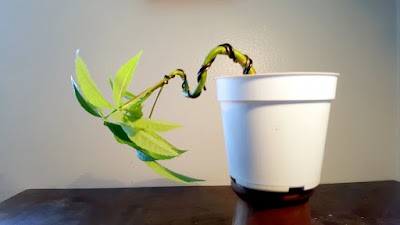 I have brought you up to date on my experiment. I'll keep you updated. Cheers.

We have branches. Or at least that is what they look like. 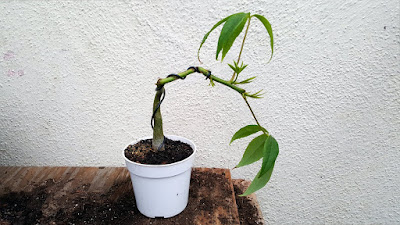 Let me show you a recent pic of the tree pictured right above: 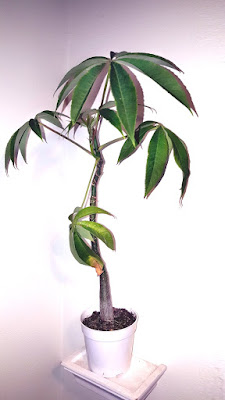 After I took the wire off the tree straightened itself. The problem is that the trunk has not lignified. The trunk is still green and not woody. The wire can cut deep into the soft tissue fairly quickly. Now, when I wired this tree i actually broke it in two places. The tree healed and I removed the wire. I thought that because of the scaring of the broken points the tree would retain its shape. I was wrong. Back to the drawing board I suppose.

I tried something else. I chopped the kapok under the oldest leaf. It was just a knob. Four branches grew from that knob. Now my Kapok looks like a palm tree. Could this be a new style in bonsai? Palm tree style bonsai? 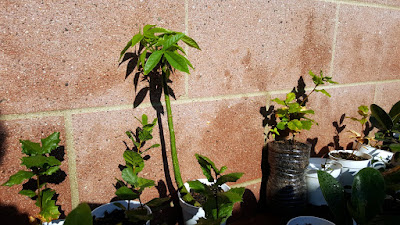 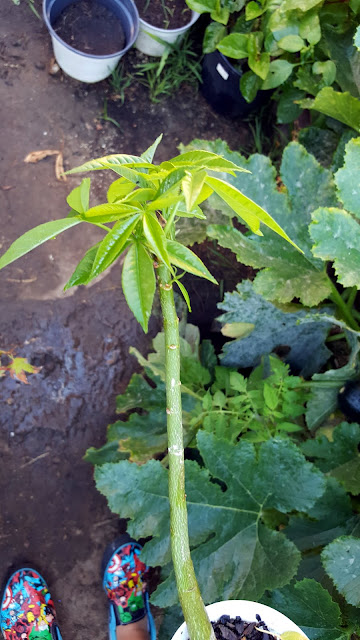 All kidding aside, I liked where the tree was going, but I thought that it needed an even more dramatic pruning. So I chopped a different tree even lower. I cut at the place where I would like to see new branches grow. A week after the chop I saw one small bud growing out, it lives!

There are little branches growing from the trunk. The trunk chop seems to be the best way to promote branch growth lower on the trunk. 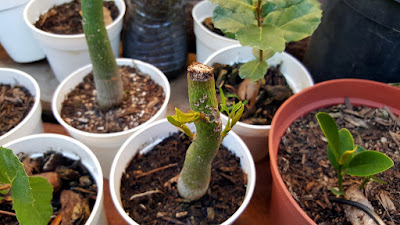 It's only been 4 days after the last update but the branches have grown tremendously. 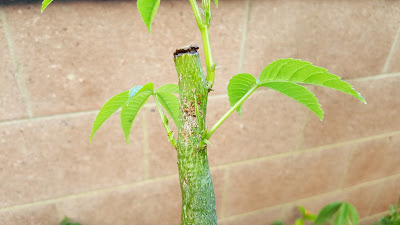 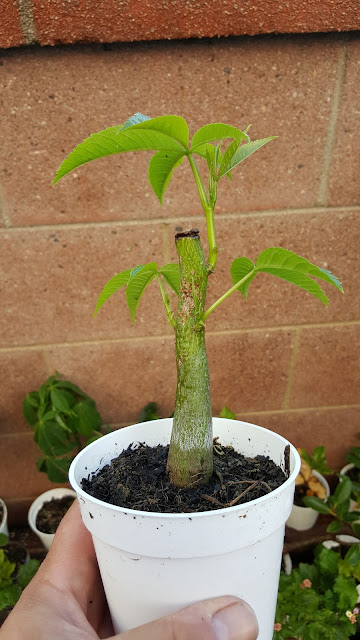 It looked promising. However, things took a turn. The kapok decided to replace its trunk and not grow new branches. 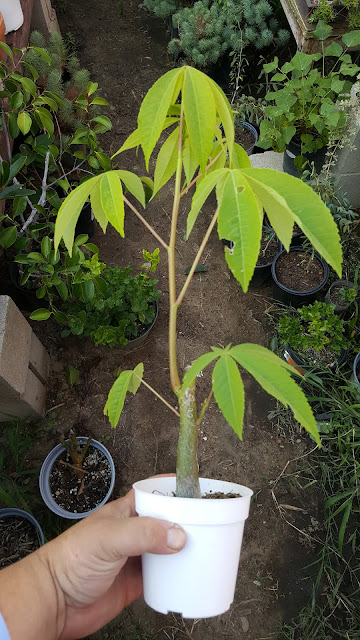 I was looking at the kapoks and I saw one that had spikes: 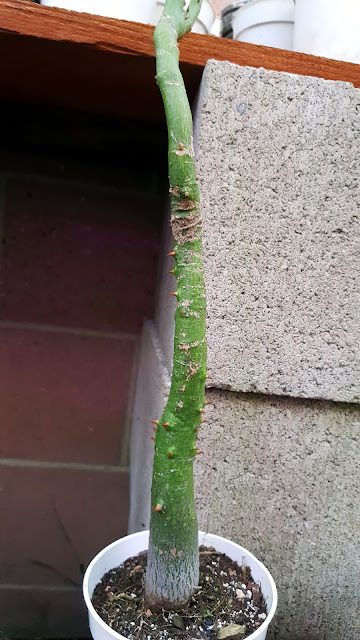 One of the trees is growing the thorn/ spikes that are typical of some of these trees.

Posted by bonsai-misadventures at 9:46 AM