Air layer is an ancient technique used for cloning plants. But Ivan, why would I use an air layer to make a bonsai? I’m glad you asked that question. There are many reasons to use an air layer to create material for bonsai.  In the same time that it takes to grow a seedling you can have a decent size trunk with mature leaves and branches. Also, some plants may flower after maturity is reached, which may take several years when grown from seed. Air layering trees that flower will produce new plants that are able to flower with in the same season.  Sometimes a bonsai will get too big and air layering will reduce the size and give you a second tree to work with. Perhaps a plant is hard to come by and air layering will produce viable copies.  Many times in bonsai an air layer is applied to a bonsai whose trunk is long and foliage is high. Air layer where the ideal trunk size starts. Air layer can also correct problems with exposed roots. Exposed roots are desired, but not when they are growing in an unpleasing way.  There are many more reasons to air layer. However, I am using it because I believe that certain branches on an apple tree would make great bonsai. So, great question.

Basically what you are doing in an air layer is removing a ring of bark all the way past the cambium layer from a branch. This will disrupt the normal flow of water. Then you will have to add some moist medium such as sphagnum moss held in place with a plastic bag. This will give the branch moisture that will keep it from drying out. I will add a rooting hormone to help the branch make roots faster.  The key to a successful air layer is three parts. First, the entire cambium layer should be removed. That layer is the white soft part behind the inner bark. You will know that you have removed it when the wood starts to look slightly more yellow instead of the white. Second, the medium in the bag has to remain moist. There should not be a pooling of water in the bag. That means that there is too much water.  An air layer will take time to develop the sufficient root mass to survive on its own. During this time I use a basting syringe to add water. Third, let the roots grow to a size that is able to support the foliage the branch has. Leaves equal perspiration. The more leaves a tree has the more water that is lost. You can reduce the amount of leaves, or you can let the roots grow out.

This apple tree started growing about four years ago.  I’m pretty sure it was delivered by a bird through its waste. The Apples are very tasty. They look like small Pink Ladies.  Apple tree bonsai look very nice, especially in the spring when they are flowering. I will be making multiple air layers on the same tree. This specific branch I feel has much potential because of its scars. They are already healing. The branch is small and thin and can be shaped by wire easily. Also, I want it to be a very small bonsai.

After choosing the branch, score it in a way that will allow you to peel a ring of bark off. I use these shears to do that. You must make a deep cut in the branch. Then, without loosening your grip move the shears around the branch until it comes back to the original position. Repeat the same procedure an inch away from the first cut.


With a pair of pliers tightly grasp the bark and move them back and forth. Do not move them side to side.  But Ivan what is the difference? Yet another great question. Move the pliers so that they are able to spin the ring of the bark. Now, this branch has a knot so it won’t spin. Make sure that not one fiber of the cambium is touching both sides of the wound. 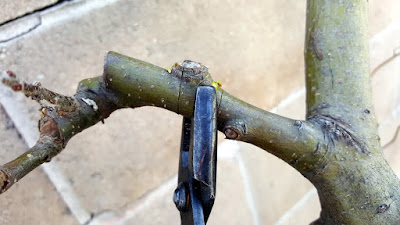 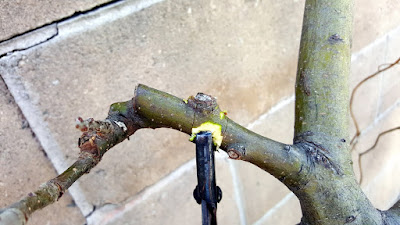 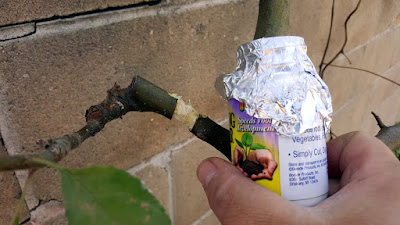 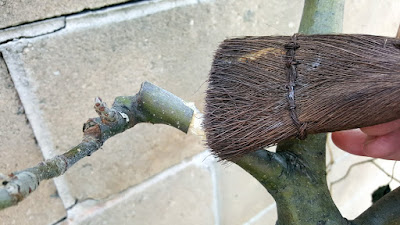 I cut the ends of a zip lock bag. This bag will hold the medium. This can be the trickiest part. Sometimes you won’t be able to use a bag because of branches or what not. You will have to use a sheet of plastic (in other words, cut the bag open so that it is no longer a bag but a plastic sheet). This will make holding it and filling it awkward. 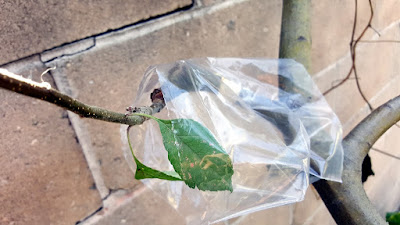 Use a rubber band to securely tighten one end of the bag. I am securing close to the fork on the main branch so that there will be space to add the medium. 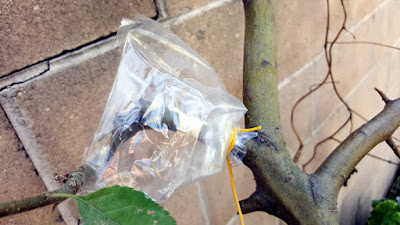 I used peat moss as the medium. My father in law grew up in Latin America. He said that they used many layers of fabric as the medium. Some people do not use a plastic bag for air layer. The use a plastic pot and cut it so that the trunk fits in the middle, they fill it with dirt and keep adding water when it starts to dry out. This can only be done with vertical trunks and branches. 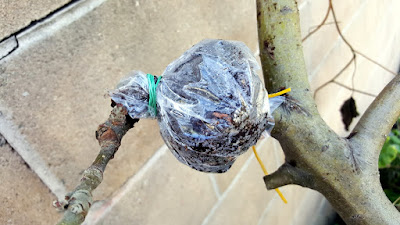 Make sure that the medium is always moist. I added a piece of aluminum to block the sun and retain more heat. You will know that it has roots when you see a white hair like strands against the dark background. Ivan how do I know if the air layer failed? Another great question my friend. If the leaves turn brown and the branch loses its color the air layer has failed. on successful air layers leave the bag on until you see a great many fine roots.  On a future post I will show you my triumphs and my defeats concerning this apple tree. Cheers.

The tie came off one of the air layers. I took a picture so you can see the growth. 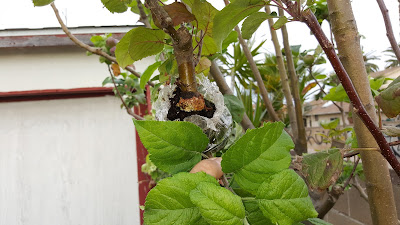 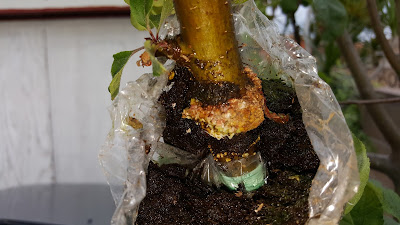 I'll be the first to admit that I somewhat neglected these air layers. I volunteer at a number of organizations, plus work, family, and life's ups and downs...well, I could have paid more attention to the apple tree. Heaven knows that I want these little guys to survive. I made three air layers on the apple tree. I decided to plant one just to see if it would survive. Normally i wait until i see long stringy roots. I opened the plastic sheath and saw white clumps. I think there are no stringy roots because i neglected to water the air layer many times during heat waves. Nevertheless, I took pruning shears and cut the air layer. the air layer did have new branches that grew after I started it.  I cut those in half to reduce the number of leaves to limit perspiration. this picture was taken twenty four hours after I cut the air layer. 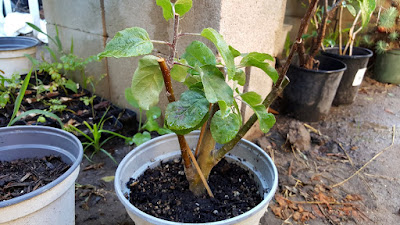 The tree looks fine, I water this part of my garden daily, so the tree has probably seen more water in the last 24 hours than from when I made the air layer to when I cut it.
Posted by bonsai-misadventures at 3:28 PM