Moss, how I harvest it

Moss, It’s green and has no roots and it grows all over the world. Moss is used in bonsai over the soil mix. When used like that it reminds me of grass under a tree. Here in sunny southern California moss is less prolific than in other places. However, if you know where to look you can harvest it. There is an auto parts store near my home. They have moss that grows on the north side of the parking lot behind a wall and under a huge bush. I have noticed two things. First, it is always damp where the moss grows. Second, the moss grows best where it gets partial sun. There is no moss in the dark by the trunk of the bush. Yet, next to the wall where it gets sun for most of the day the moss looks like a velvety green carpet.

These are the tools I use for gathering moss. One is a cookie tin I had punched holes in. Originally I used it as a seed starter. The other is a dough cutter that I bought for two dollars and some change.

This is the patch that I will harvest moss from. I want to avoid picking up weeds. Also, I want to get the moss where it is the thickest. You can see that there are a lot of weeds growing in the moss patch. I will try to avoid these as much as possible. The area of moss in the picture is about two feet by one foot. There is plenty of moss without weeds.


I press down where I don’t want to collect from. This way when I do scoop up moss I will not pick up moss on the other side of the crease. 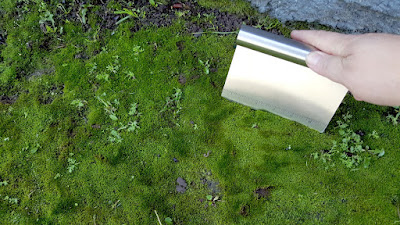 I push the cutter in at a low angle until the moss gives. After, the dough cutter slides in fairly easy. When I have a piece the size I want I lift the cutter up. The moss holds its shape very well. 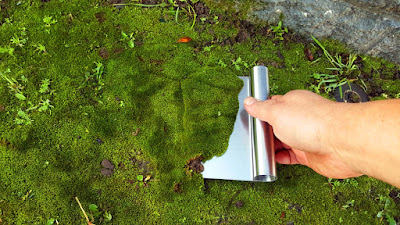 To keep the moss moist I use a plastic box. The box will hold water. The house I live in was built in the early 50’s. I pulled out a lot of these decorative bricks taht were original to the house. Bricks absorb lots of water. I will set the moss on the bricks so that they can stay moist but not submerged.

When you put the moss on the brick, sprinkle some water on the moss. Then press on the moss firmly. Don’t be scared you won’t damage the moss more than what you did when it was removed from its home.

I love this little figure. I hope it looks like a man and water buffalo resting on grass under a tree. This was the common moss that grows locally. I have tried the Kyoto spores with no success. Anybody have any success with those?


Posted by bonsai-misadventures at 1:49 PM