developing refinement, the tree, me and my daughter

Last Christmas I saw some beautiful holly decorations. So, I set out to look for holly. Last week I found what to me was a holly with great potential. The pot was not priced however, and it was sitting next to 35-40 dollar plants. I went home without purchasing it. When I got home I was unloading the car when I saw a green flash against the yellowing grass (we are conserving water here in southern California). It was a $20 dollar bill. Hooray, I was going to finally buy my holly. The nursery sold me the tree for 20 dollars even. I was giddy with delight. 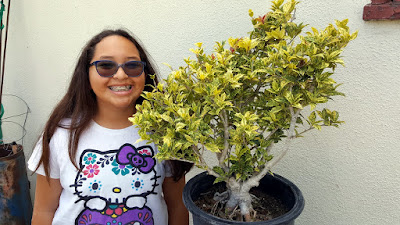 Some people do not like variegated plants for bonsai. They say that they are weaker than the common varieties. I was willing to experiment. This holly looked well aged yet had new growth. 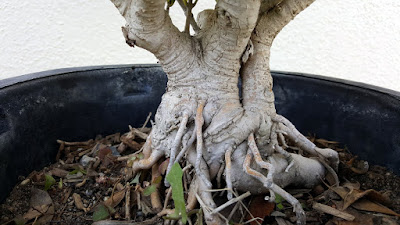 For this project I was going to have My daughter whom I lovingly call Monkey do most of the work. This would be an exercise in guiding and teaching my daughter.

What we set out to do is remove unneeded branches, reduce the overall size of the tree, and set the trees skeleton by lowering the lower branches.

We chose to cut the branch at this point because it was just above a growth of younger branches. These newer branches will become the apex. 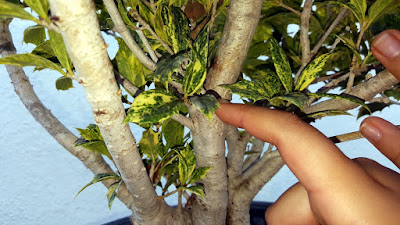 It was somewhat difficult for my daughter to cut the branch. First, the places where her hands could get leverage where directly in the path of the saw. Second the cut was at an awkward angle. It was difficult for her to get a rhythm with the saw. We lost a few of the young branches. 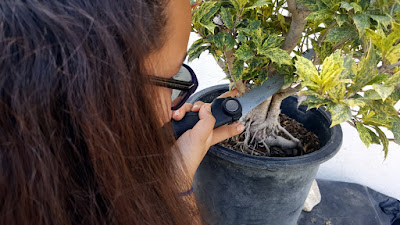 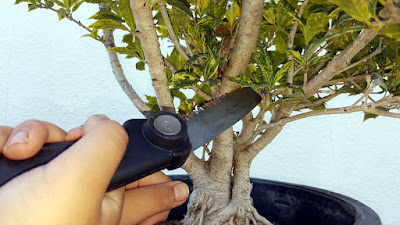 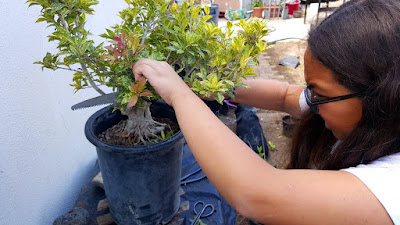 After, the branches were cut to size relative to the new apex. 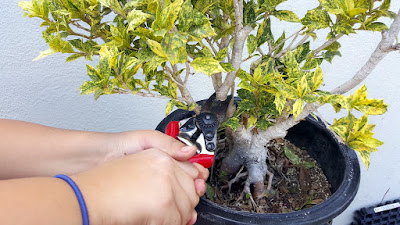 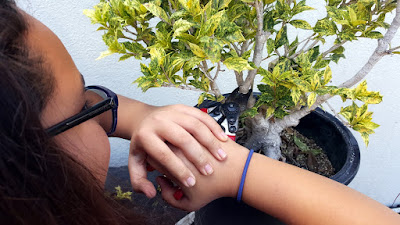 And finally the lower branches were wired and placed where they needed to be. What will become the first or lower branch (the big one moving left) was not pruned so that it can grow relatively undisturbed. The other lowered branches were thinned a bit to promote back budding. 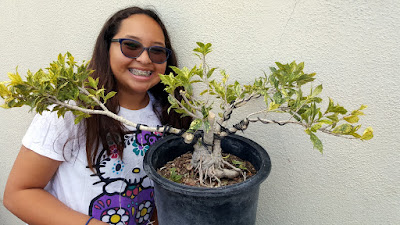 The stage is now set to develop this tree into a bonsai. Of course I might have been frustrated at moments, but I never said a word. The key to my daughter appreciating this hobby and maybe sharing it with me is positive reinforcement. She puts up with my eccentric hobbies because she likes spending time with me. I would not want to discourage her by micromanaging or scolding her. Like a bonsai I am trying to develop my daughter’s potential.

Well, enough about that. We’ll keep you updated on the Ilex. Cheers.

Well, it's 21 days later. My daughters work is coming to fruition. The tree has a lot of new growth and plenty of back budding. All those reddish brown spots are brand new soft supple leaves. 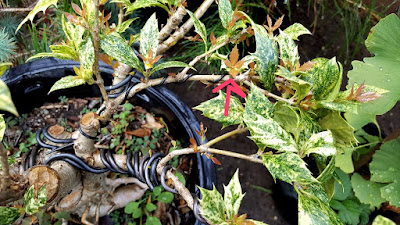 This is going to be the lowest branch. it was long and only had leaves all in a clump at the very top. Now many new leaves are growing from the bare branch. The Holly is next to a stone pine. That is why there are needles in the pic 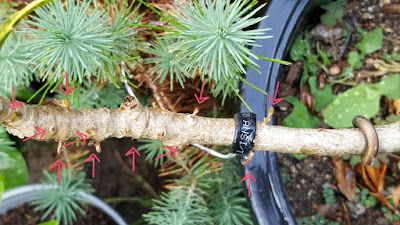 Posted by bonsai-misadventures at 9:42 AM