Hi everyone, I found an amazing tree this week. Yes, it's another ficus. I love these trees. They are oh so resilient. This one in particular has a very good skeleton. It has a wide base. The base tapers into four branches of varying thickness. I cut the branches down to what I thought would give me good results as far as new branch growth.   Because this is an epiphyte it has many aerial roots growing from the trunk. I see a bright future for this little tree. 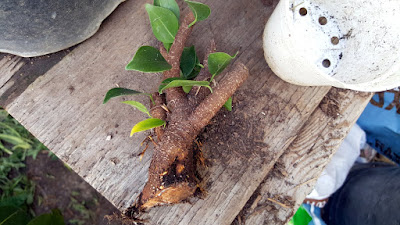 I know, I talk about ficuses all the time. To tell you the truth like many other tree species i could have cared less for any ficus. What happened? Well, instead of the usual potted ficus benjamina common to any home or office, I saw on the internet what a ficus could become. I saw twisting trunks, large buttressing aerial roots, and miniaturized leaves. I saw Jaw dropping beauty. I was amazed at the growth rate and sheer will to live. 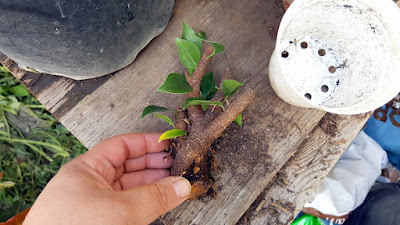 A ficus is a tropical plant. When I see ficus bonsai i think of hot steamy jungles. I think of Angkor Wat, I think of mayan ruins.  I picture India and monsoon. I can have all of that in a small little pot holding a small little tree. 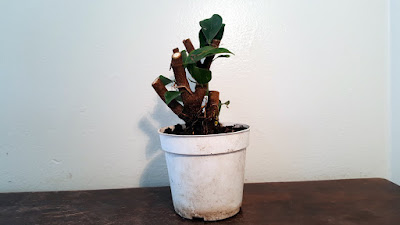 Ficus are easy finds for me. I work in the middle of the city. However I am surrounded by hundreds of species of trees and plants. From conifers to azaleas. cork oaks to moreton bay ficus. There is a specific pattern as to epiphytic ficus. There is a relationship between Italian stone pine and ficus microcarpa. Ficus microcarpa seem to thrive in the crotch and cracks of stone pine. The crevices and crotches of stone pine hold needle deposits which for the most part lay untampered (the exception is when I snoop around looking for epiphytic ficus). The needles collect dust and dirt, and though we do not receive much rain here in southern California the thick layers of needles hold moisture. The gardeners do turn on the high powered sprinklers who splash the pines from time to time. Birds, i guess eat figs from the many chinese banyan (ficus microcarpa). The birds then deposit their waste when they sit on tree branches. Although we have many trees I only see epiphytes on Italian stone pines, and palm trees. The ratio of pines to palm trees is vastly disproportionate something like 5:1. 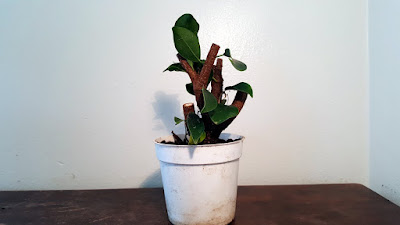 Enough about the ficus. I still dislike ficus elastica the so called rubber tree. Although, I have seen one variety with interesting colors and patterns. I have tried to grow ficus religiosa with no success. I have purchased seeds from various sources. I would have bought a young f. religiosa, but the the specimens I have seen are just out of reach as far as price. I also am in search of ficus nerifolia. That ficus also has been out of reach.  I could keep going, but I won’t. Cheers.

15 days later and little buds are growing out of the cutting. Which means that the cutting has roots. Now that it has roots I will fertilize and being a ficus it will grow exponentially. Yay! 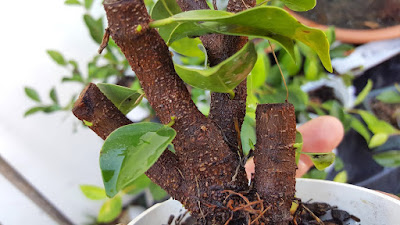 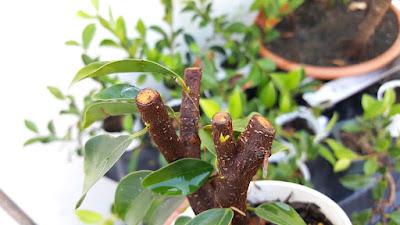 One month and ten days later the ficus has branches big enough to wire. I still will not prune until the branches are at a desirable thickness. I have noticed that if the branch lignified that it will grow new branches from different places on the branch and not just where a leaf grows. 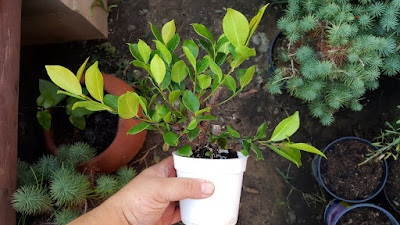 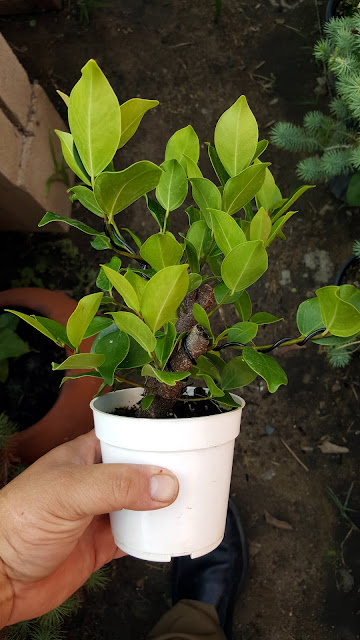 Posted by bonsai-misadventures at 8:55 AM