When I was learning about art the professor said something that made me contemplate. I forget why he said it, I think somebody was trying to make some kind of excuse for weak work. My professor said something like It doesn't matter what you use an artist makes art with what he has. I am sure that it sounded so much more poetic when it was said. This little bit of philosophy I have carried with me since.


We collect materials from where we can get them. Anybody can make a bonsai from a tree that already looks like a bonsai. Where is the challenge in that? There's more satisfaction in creating a bonsai from material that you would not imagine would become bonsai.

This six inch lantana has been on a rollercoaster. I have nearly lost it twice to heat waves. I have hard pruned it three times. Now, a year later it is finally starting to show promise. I have more affinity for the trees like this one that have taught me the most about bonsai. 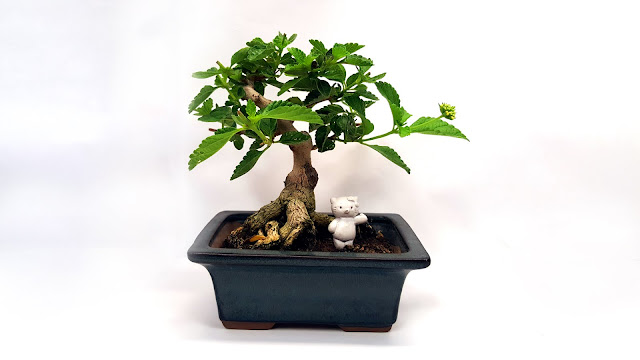