grafting gone wrong, I did it this time

I tried making a thread graft on a Ficus microcarpa. Tried is the key word. Things went south during the process. Thread grafting is when you drill a hole in a tree and place a branch in that hole. Usually the selected branches are thin and small. However, on Ficus microcarpa I have seen some pretty big grafts. So, without further adue here is my story:

I wired this branch so I could lower it. After it set I decided to chop the branch down and try grafting it to another Chinese banyan. 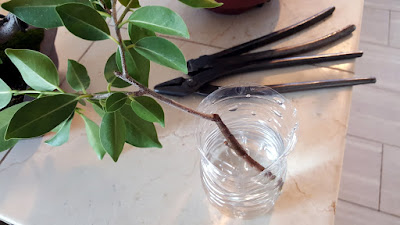 I wanted to get everything right. I made some holes of different sizes so that the branch would fit snugly in its new home. 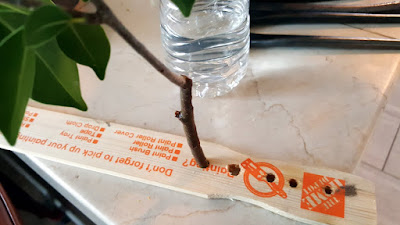 I chose the spot where the new branch would go. This was not my first choice. This tree was collected. Before I could get to it the gardeners for years had hacked at it. It has a lot of scarring. Where I wanted to put the graft there was not enough living tissue. So I chose this side. It also needed a branch. 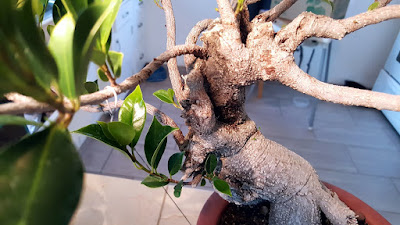 I played with the branch position to see where it would look the best. 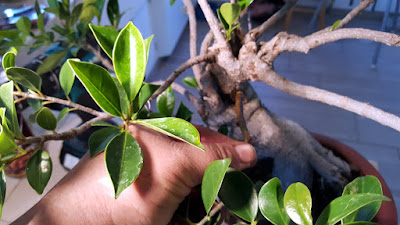 I chose a spot and started to drill. The flesh was a lot softer than I thought it would be. I made sure that I did not drill too deep. 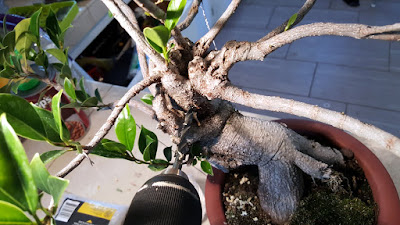 I inserted the branch and to my horror it was somewhat loose. I needed a tight sealed fit. I had many choices at this point. However, I might make things worse. I chose what I thought would be the most successful and the most simple option... 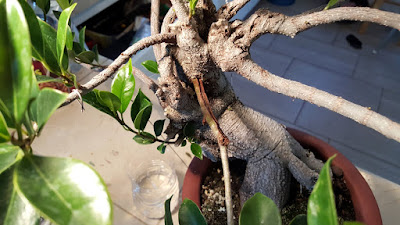 … I wedged two pieces of a bamboo skewer. 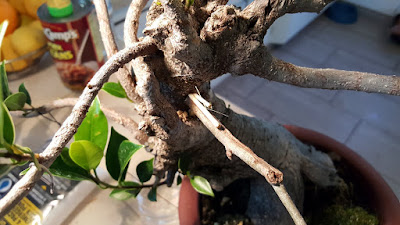 Then I sealed it all with beeswax. 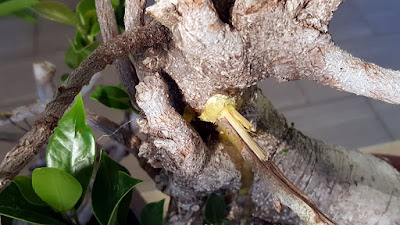 What went wrong? Maybe I forgot to change the drill bit back to the smaller size. Perhaps I did not drill straight in and out making a bigger hole. Or i did not factor in when i shaved the bark to get to the cambium layer. I strongly think it was the bit size though. This was my first thread graft. I hope that it takes, but knowing what I did I won't be surprised if the graft does not take. Im hoping that because it is a chinese banyan, and they are resilient trees that it will work out. Cheers.

Last weekend we had unusually strong winds. the tree was blown off the stand. A few branches were cracked including the graft. This will be marked as a Learning experience.
Posted by bonsai-misadventures at 9:52 AM