The Novice’s Wife
When I met my husband, he struck me as being… peculiar but in a good way. He read textbooks for fun, took up hobbies that he became almost obsessively dedicated to (arrow making, bead work, leather work, stargazing, etc), and enjoyed talking about all of the new things that he had discovered about these hobbies. I love to listen to his discoveries though not always with the devotion that is needed.

Sometime ago (the running theme is that I am terrible with dates and details), so, some time ago a kind coworker and firend gave my husband a juniper. A bonsai. My husband came home so excited, he stared at it, pondered its shape, and I knew immediately, we were on the cusp of a new hobby/adventure.
He trimmed the little tree, gave it a shape more pleasing to his eye, began watching seemingly endless videos on bonsai, reading articles about the art and history… next thing you know, one tree was not enough. Our backyard suddenly had an increasing number of seedlings and pine trees (this was in January when all of the Christmas pine trees were on sale - hey I recalled a detail!), and cuttings. Cuttings from trees he found at work, on his way home from work, on his way to the car from a store, so many cuttings.
We had a new baby at the time; she was around four months when the bonsai obsession began. So as a new mom, I tried to support my husband and participate but I was sleepy and tired. While I bought a tree here and there with him, he and the bonsai hobby soon left me behind. A year later, I am still sleepy and tired and find it hard to join him in his enthusiasm for bonsai but I love that he loves bonsai. I love that he can channel his energies into such a beautiful art. I love his sketches and plans for a nursery. I absolutely love seeing him and our girls wander nurseries for that one tree with the perfect trunk or leaves or who knows what else. Those are memories I cherish and know our girls will as well. I love reading his blog, which I need to do more often. I love his Instagram account (he had sworn to never have a social media account) and seeing the world through his eyes, if only a snapshot at a time.
My efforts at supporting the bonsai hobby:
I try to keep my own orchid garden, at least we are outdoors together. This was taken in DC at the arboretum. 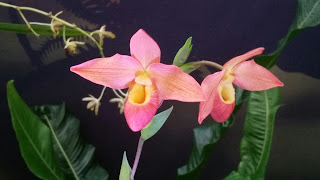 I’ve also made bonsai themed  items such a felt phone case which he wore out very quickly. 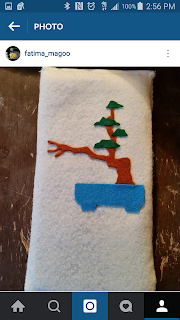 When I met my husband, he was a hermit who seldom put the Xbox controller down or left his home (other than for rugby or outings with Little Fat Fat). Now, we enjoy days out in the sun, touring gardens, exploring new places. Being the bonsai novice’s wife is an adventure.
I can’t say Cheers because all I can think of is the classic TV show, so I’ll say thanks for reading.
- edited because of reddit trolls.
Posted by fatima at 1:34 PM