I promised and now I have delivered. the soil water retention test. Guess what, I was surprised by one test subject. Bonsai soil theory (lol) is a very controvertial topic (see: http://bonsai-misadventures.blogspot.com/2016/03/bonsai-soil-mix-or-how-to-get-black-eye.html). With this test I will try to support some of the ideas from my earlier posts. This is the first time that I actually try to measure what soils retain the most moisture.

For this extremely scientific test (Mrs. Takumi my high school chemistry teacher would be proud) I placed the medium in two inch by two inch pots. Starting from the left to the right I used fine sand, Turface, bark used for potting orchids, black volcanic sand, and potting compost.

For each soil type I applied two ounces of water with this basting syringe.


I placed the pot over a plastic cup. The I gently squeezed the water at the same time trying to get everything wet. I did the same to all of the pots. 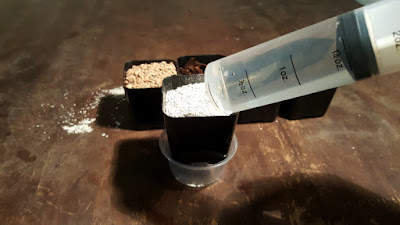 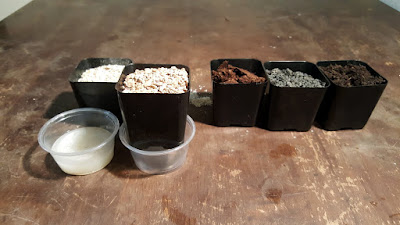 These were the results. The least water that was retained was by the bark. It retained a little over half an ounce of water. This was almost half of that retained by the other substrates. I was very surprised by that. I thought that water retention would be greater. The most retention was by turface. I thought it was going to retain less water. Turface is a baked clay. Baked clays have micro fissures that hold water. Yet overall it was not much more than sand. I am definitely going to use a lot more turface in my soil mixes. The sand retained a lot of water. This confirms that smaller particles retain more water. Smaller particles create greater surface area. Water cling to the surface, so more water is retained. A problem with sand though is that when wet due to water's molecular properties of attraction the sand becomes compact which is not good for roots. The volcanic rock retained the second least amount of water. It is very porous trapping some water. The composted soil was right in the middle for water retainment. 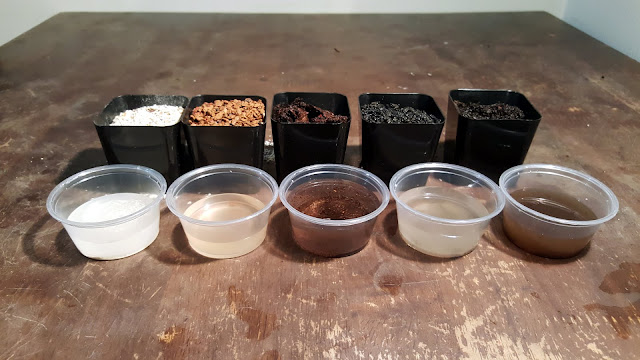 When mixing soil keep in mind that evaporation rates vary according to substrate.

This final picture is of one part Turface, one part sand, and one part compost. Water retention was right in the middle about one ounce.

When you mix your soils ask yourselves how much does it rain? How cool/ hot is it. What will be the humidity this year. All those factors and more determine evaporation rate. Where I live it is 80 degrees in the summer with a cool sea breeze. It rains very little and it is slightly humid. I need to retain just enough moisture so that I water my plants once a day. Of course there are many variables when it comes to water retention such as atmospheric pressure, pot size and many other things. I hope this helped though cheers.

If you want to get fancy and learn more look at this https://en.wikipedia.org/wiki/Water_retention_curve

Posted by bonsai-misadventures at 12:12 PM