Do you like to grow things? Do you like rocks? Let me show you something. At the bonsai club that I joined last year, they have a raffle at the end of the meeting. One meeting I won a carved rock. I knew what it was for but I had no interest in rock plantings.  Some months later I remembered this nice Chinese elm from the National Bonsai Museum. I thought it was a very interesting piece. 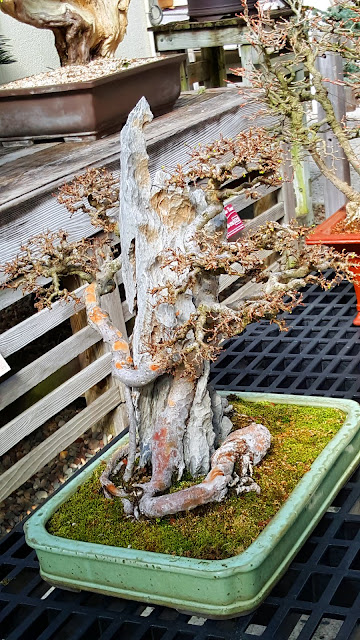 I thought why not? Why can’t I make one of those?

I grabbed the rock, three Ficus macrophylla trees, some black lava rock, perlite, and composted dirt. I mixed it all together and put it in an Ikea pot. 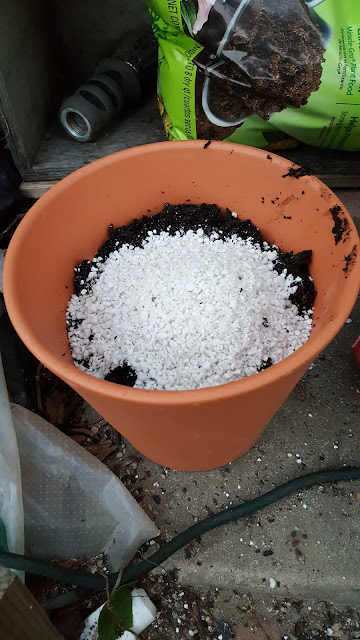 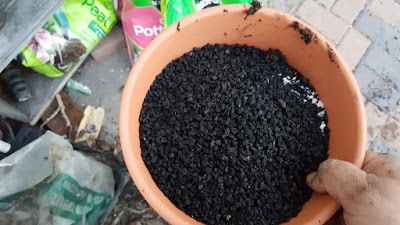 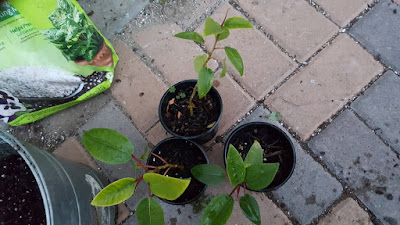 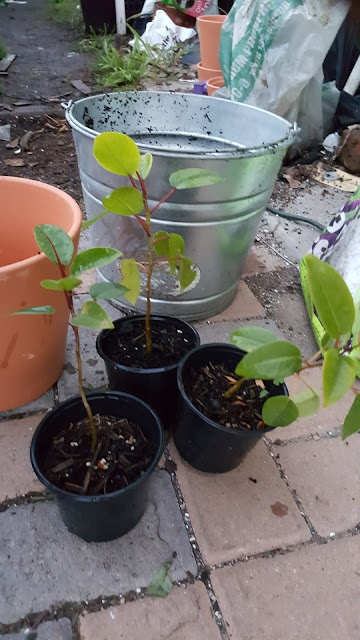 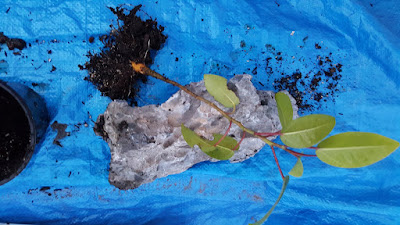 I Imagined the way I wanted the trees to grow and placed the trees accordingly. Then I added a bit more dirt.

That's all I am going to do until mid-March. I want the roots to grow. That will anchor the trees. Then and only then will I start positioning the trees exactly how I want them. 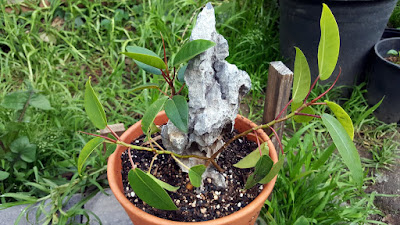 The rock is buried deep enough to be able to stand on its own. It will be interesting to see how this project will develop. Go forth and rock out. Cheers.

I gave the ficus' time to grow some roots. New leaves are coming in so it is a good time to start phase II. What I want is for the trees to follow the contours of the rock, and for the tree's trunk to grow and brace itself on the cracks. The problem is that whatever I use to bind the trees with will only hold to the peaks of the rock and not the valleys. It's in the valleys that I want the trees to grow. What I did was add pieces of foam over the tree until it became a peak and was held by the raffia. I am thinking of reinforcing the raffia with some wire. 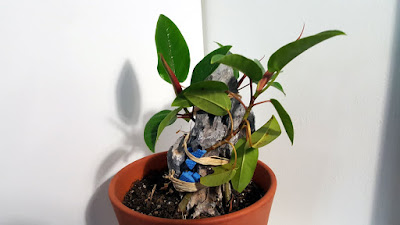 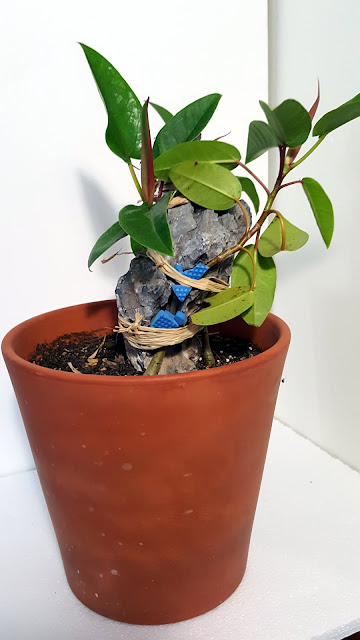 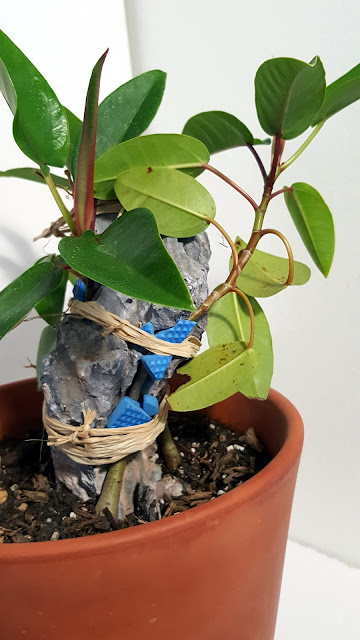 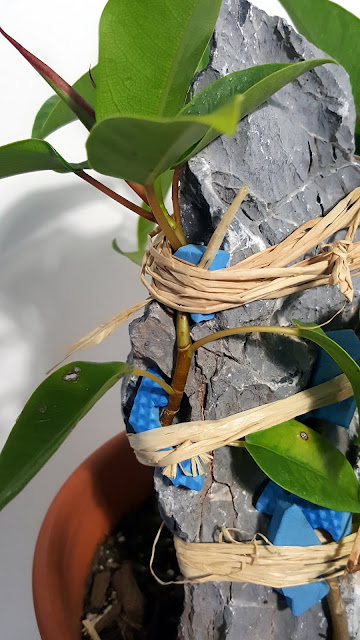 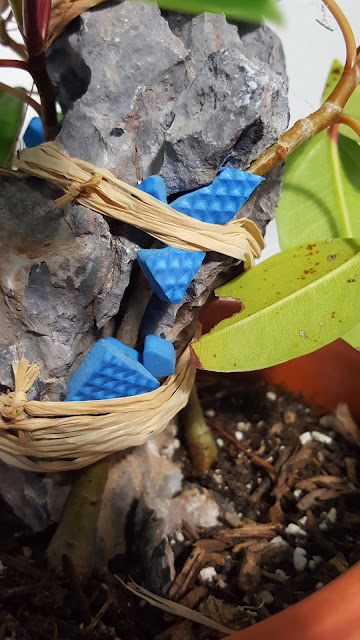 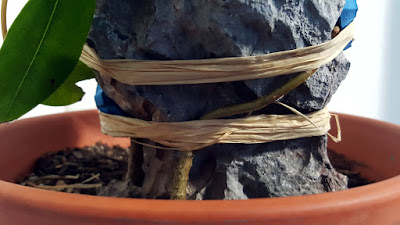 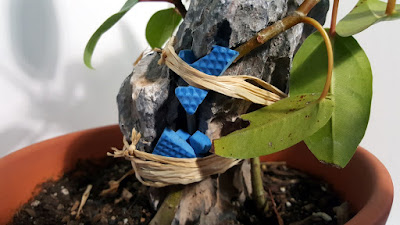 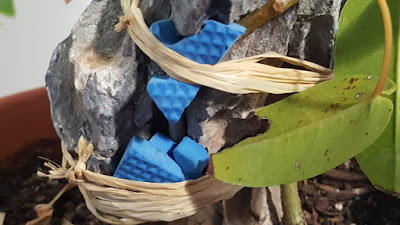 I will wait to see how thick the trunks get before I think of pruning the trees. Why would I prune the trees? to make it grow branches, of course ;). Cheers.

Update: Feb. 13, 2018
The trees grew to about a foot and a half. I added a little curve to a couple of them. I was happy with the trunk thickness to rock ratio. So, to promote branches I chopped off the tops. Four weeks later buds started to pop out. These I will let grow for another year before I chop them. I will wire the branches for shape before the chop. 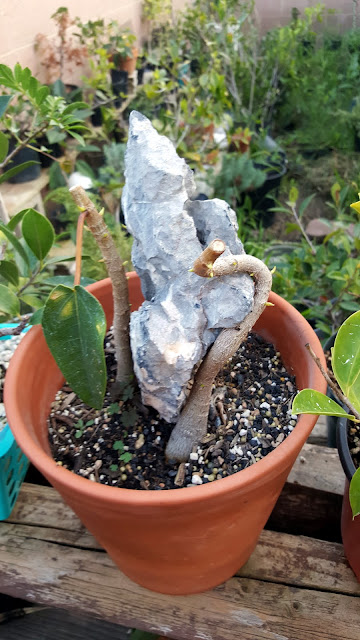 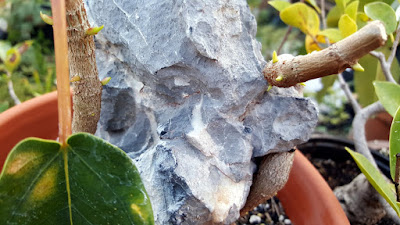