Winter is in full swing here in southern California. Where I live the Temperature has dropped below 50 degrees fahrenheit a few times over night. I know, t-shirt weather in many places around the world. I picked up a few conifers this week so that I could start working on something during our two and a half month long winter. I have not had much success with conifers in the past. It could be said that I have outright murdered them.  I have made some progress over the last year however, and now feel bold enough to attempt conifers again.

TI picked up a dwarf mugo that cost around $7.00 in U.S. I had bought one before that was much bigger. I found that the branches were very leggy. The legggy branches made it very difficult to work with. 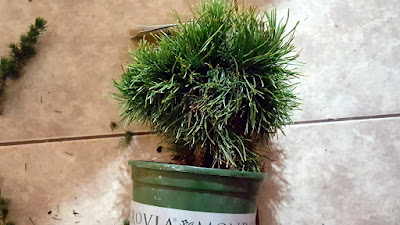 For this tree I started at the easiest place to start. That would be the base of the trunk. The place where the trunk meets the soil. As a general rule there should be no branches there. I keep removing branches as i move up the tree until I feel satisfied with how the trunk looks. With all the foliage removed from the base I can see the tree in a better light. I can make better decisions regarding which branches stay and which branches “got ta go!” 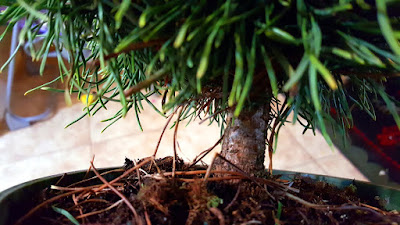 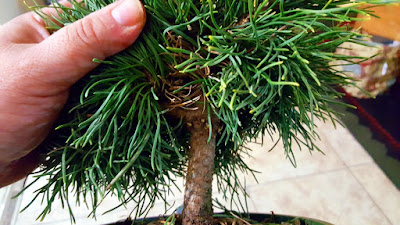 I chopped off all the branches that grew straight down. After that, I chopped off the secondary branches on lateral primary branches. In other words i cut the branches growing up from main branches but not the ones in the tree apex. This thins out the tree quite a bit. It's amazing to see how drastically different a tree looks after each part of the pruning. 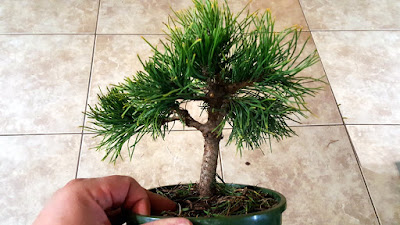 After that, I cut branches that are growing out of the same or near the same spot. Sometimes it's obvious which one to cut. Other times it doesn't matter.  You do have to get rid of one for aesthetics. I also cut some of the very small branches that give the tree needle volume but that are not very useful for composition. As a general rule i try to follow the concept of brackets like the kind they use for playoffs but backwards. I follow the main branch, that should split into two branches, those split off into two branches each etc. At this stage in the trees life it is not to important to remove all of the unnecessary branches. I did trim the top a bit to give it some shape.

I still was not feeling right about the tree. so I chopped off the two lowest branches and then it came together in my head. I know some of you may not agree with the last two cuts I made, but I think that this is the foundations for a great bonsai. Did I cut too much? Let me know. 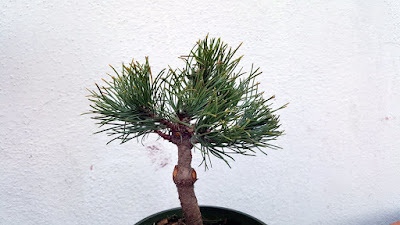 Posted by bonsai-misadventures at 1:56 PM