What Ficus Microcarpa has taught me

I have been working with a lot of ficus microcarpa this year. I have learned a few things (and I realized I have many more things to learn).

I have posted many times before on how resilient ficus microcarpa is. Many times I thought I had killed a tree. All the leaves would drop. It would look so sad. I would set them aside to discard later where i would forget about them. Then I would find them some time later with little green buds pushing their way out of the bark. That's not to say that some have not died all the way (The Princess Bride, anybody?). I have bent trunks to amazing curves. I have potted trees in the smallest of pots, I have pruned all but a few short branches and these trees keep coming back. I have seen pictures of abandoned ficus bonsai which have broken free of the pot and have become full size trees.

Something I have noticed about FM is that there is a big difference in pruning green branches versus pruning hardened or lignified branches. Knowing what happens can help in bonsai design. When you cut a green branch it will die back to the node just below the cut. You can cut a foot  from a node it will still die back to the first node under the cut. The benefit to this as I have seen is two part. First, as the branch continues to grow it will heal without a scar. Yes, that type of pruning heals fast and if you remove all the dead tissue it will heal smoothly.  Second, I notice that if you cut the bud while the leaf is still small the leaf will pretty much stay the same size. You can get amazingly small leaves like that. 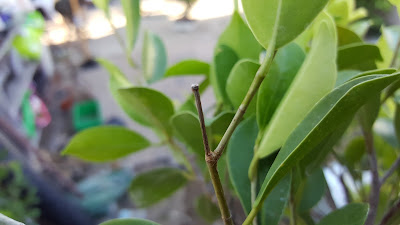 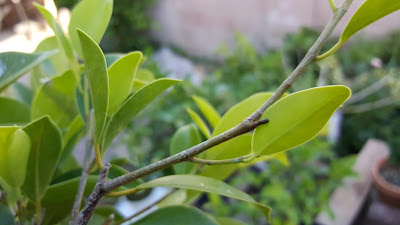 Cutting bigger lignified branches is a different story. A lignified branch is a branch that has become woody. These branches can bud anywhere along the branch. That means that if you cut it short it will bud somewhere in the vicinity of where you wanted it to bud. You may also get multiple buds. That means more branches, more ramification, and more leaf reduction.


There is some differing opinion on what I am going to say next. Please keep in mind that this is a post about ficus microcarpa. If you leave a branch uncut it will thicken faster than  if you prune and let the new branches grow. Here is an example: I let a new branch grow to cover a bald spot on a tree. I did not prune the branch until it got to a thickness close to the other branches. So far so good. Yet, at the same time I have branches that are six month older. These branches i clip because I am trying to develop fine ramification. If these two branches thickened at the same rate I would have incredibly thick branches with exaggerated taper, which is not the case. An uncut branch will thicken faster than branches that are pruned. 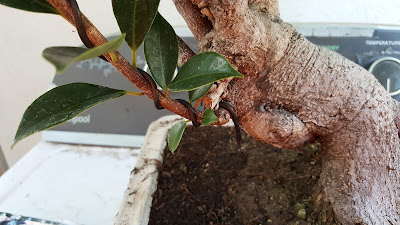 A great thing about ficus microcarpa is that they are ready to grow aerial roots. All you need is moisture. Here is what I do. I add ground bark to the pot to the height I want aerial roots to grow. Then I water as usual. In as little as a week you will be able to see aerial root buds. Leave the bark (or sphagnum moss, or anything that will keep the trunk moist) on for as long as you want. I have a tree that grew aerial roots very low on the trunk. Now the tree has buttressing roots. I know in cold climates where you keep ficus indoor in special light and humidity grow containers have a high number of aerial roots because the humidity is so high. I have not grown aerial roots from branches yet. I am devising a plan as i write. I will put moss on said branch and will wrap it with mesh. The mesh will help me regulate humidity through spraying. It might be easier to wrap it with plastic, but why make things easier on me? 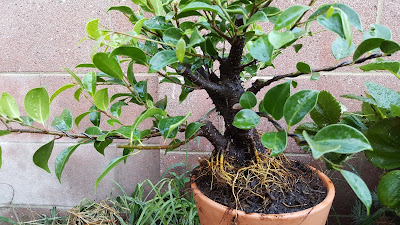 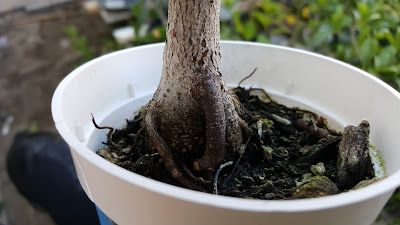 
I have taken cuttings of varying sizes from epiphytic ficus microcarpa. Some have been the thickness of a pencil and some 4.5 inches in diameter. I would say that 99.1 percent have survived. I have taken cuttings from a FM tree. I have had 60 percent success with those. I always plant cuttings in bark. Bark retains little water yet keeps things moist. Bark has barely any nutrients, so after the cuttings have rooted I put them in composted soil i buy for two dollars American from the big box store. Even the huge cuttings I have taken I have put in bark.

That is all I can think of for now. If I remember anything else I will add an update. Cheers.