August repotting of a pre bonsai, the roots are moving to a deluxe apartment in the "sky?"

Here in southern California the heat is on. We just had a heat wave accompanied by a huge forest fire. I live in Los Angeles. This city can get very arid. Since I live close to the Los Angeles International airport I sometimes bump into tourists. One in particular was a very nice man from England. One of his complaints about Los Angeles was that it does not have many green spaces. The reason for this is that los angeles is in fact a desert. We have little rainfall. We have few rivers and streams. If it were not for aqueducts and the great San Francisco earthquake we would have been a small town of little importance.

The fact remains that it can get hot in Los Angeles. Heat is wonderful for growing tropical plants. I potted this ficus cutting in a bonsai pot so the roots could start growing. eight months later and the growth rate has been amazing. 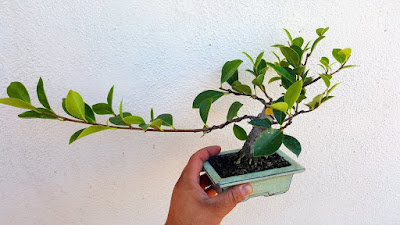 I believe that this is the perfect time to pot this tree in a bigger pot. Some people repot conifers and deciduous trees in August. Some tree species go into a dormant phase during August. I am not convinced that tropical trees go into a dormant phase in August. However, it being a ficus it is very resilient, and to tell you the truth I would repot it any time of the year. It's just that I am doing a lot of repotting this week, so I decided to repot this tree as well. 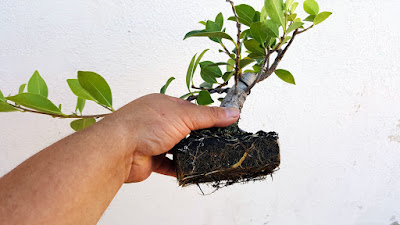 This specific cutting loves to grow aerial roots. In fact, if you look at this picture you can see that some aerial roots have thickened and now look like buttressing roots.  Humidity in Los angeles is midrange to low. When I water the trees i wet the brick wall, I wet all the ground, and I have a tub under some planks to capture the runoff.  All this increases humidity which means more aerial roots. 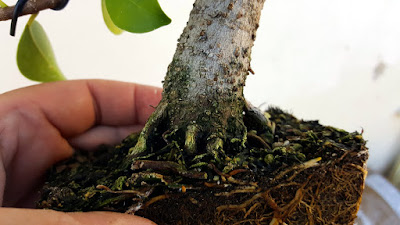 I am going to try to keep the root ball intact even when it is time to pot in a bonsai pot. I noticed that this is a technique used in conifers. 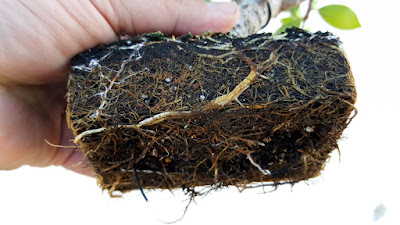 More space for the roots means more growth. More growth translates to quicker development, or so the story goes. Cheers.

Posted by bonsai-misadventures at 12:52 PM