It's pronounced kəˈtoʊniːˈæstər not Cotton Easter

I saw the most amazing cotoneaster at one of my favorite nurseries yesterday. It had beautiful leaves. The leaves where about just right for the size of the bush. The bush had a few berries hanging on. Yet, The greatest feature was its natural curved trunk. I however, will show you the after shot first. Why? Because I chopped and hacked, and maimed this poor little tree.

I honestly did not want to. The tree gave no choice, no choice if it wants to become an amazing bonsai. This is what I envision for it.

Now let me show you what I started off with. 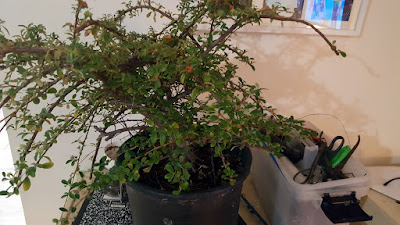 I know, it had unbridled branches much like the hair of a free spirited hippie who ignores hygiene and never washes their hair. That was what drew me to it. Beautiful leaves and berries on a large mane. What kept me though was its long and well developed curved body. A tree can never reach its potential if the trunk does not look good. A good trunk and bad branches what do you do? You chop off the branches.  Good branches and bad trunk? You can't chop the trunk. You can correct issues with trunks, but that will take longer than a branch problem in pre bonsai trees. 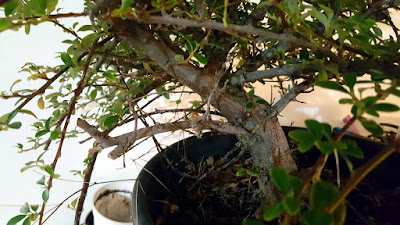 As you can see I had many choices on how I could shape this tree. Different people will have different viewpoints. You may infact say that my choices are crazy, and you know what? You may be one hundred percent correct. However, I have made the cuts so now it's too late to fix anything. 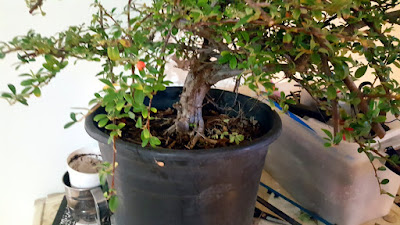 The two aesthetic principles that i gave the most weight to was first, movement. Second, I wanted a nice taper up the tree. I cut away all the dead stuff, and all the things that obviously I did not want to keep. Those would be smaller low branches, branches growing against the direction of the other branches, very large higher branches. 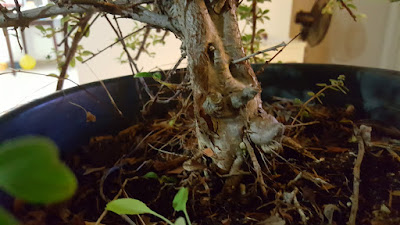 You can see that with some clean up the picture begins to focus. Every time we do something to the tree it should make in our mind's eye a clearer vision of where the tree will end up. I love cascade and leaning bonsai. I would have loved to have left the main line of the trunk reaching out over the pot, but this would not have made a great bonsai. The main line is moving to the right. I needed to change direction to make it more interesting. 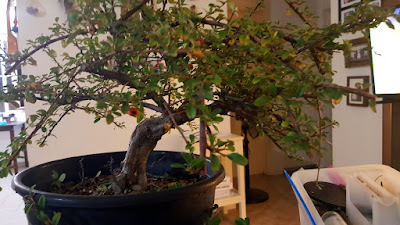 After the cut was made the tree looked even better to me. It was obvious that the direction of the main branch though moving in another direction was still too long and straight, and that my friends is not interesting. I also saw that a few branches i had left on top of the big curve did not look so great. Another challenge was that the top branches were very thick. I needed nice thin branches. I knew i would have to lob them off. 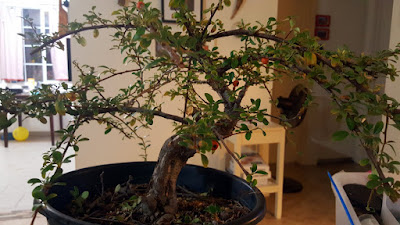 The last thought was of movement. The trunks line will end at the apex. The new apex is the little tiny branch the orange arrow is pointing too. Their is a small problem as the branch the new apex sits on is a little thicker than i would like. That is a problem for next year though. 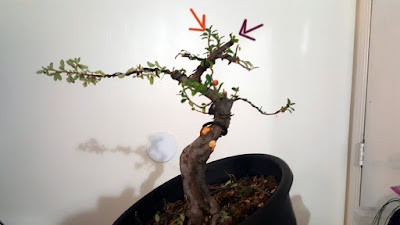 Did i cut too much. I would say yes. We'll see what happens. Good or bad I will definitely learn something from this tree. Cheers.

Did you know that cotoneaster is in the rose family? I was a little afraid that I had cut off more than I could chew. I would say that I chopped off  95 percent of the foliage. Yet, this resilient plant only 11 days later has given me a rose.

This is of course, a very good sign. the leaves on the left branch are also new. What an incredible find this tree was.

One month and a week after i pruned this little tree it has pushed out many new branches. I will remove the branches that I do not want. Those include downward and upward facing branches. Also, branches growing to close and in the same direction and others. The new branches I leave will become my primary branches. I will not brune those until probably next August so they can thicken and grow secondary branches.


Top view  shows that the branches are growing in a radial pattern. 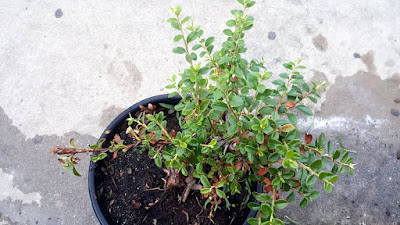 Posted by bonsai-misadventures at 12:27 AM