Root over rock, roots are king


Happy mother's day to all of you mothers, people born of a mother, and who know one. Most readers of this blog are male. It is Mother's day here in the U.S.

Yesterday I was at the zoo in the city where I live. It is a lovely place. The animals for the most part seem relatively healthy (i am guessing as I am not a veterinarian). I was admiring the many ficus that the zoo has. I saw large leaved ficus, Chinese banyan, port Jackson fig, and Moreton bay fig. The zoo had amazing specimens of these last figs. The roots were buttressed, large, and long. 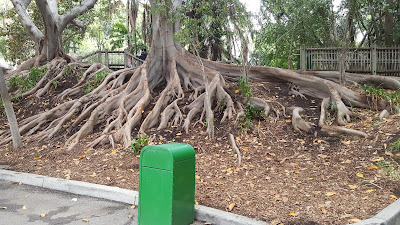 Then I came to a bamboo grove. I saw these little trees growing out of a dead log. They looked like ficus, but I had never seen leaves like the ones on those plants. I pulled at one of the plants and the whole thing roots and all gave way. Now I was sure that it was an epiphyte. I had two choices: put it back or not putting it back. Why not put it back? Because digging up dirt and planting a plant I believe is frowned upon at this zoo. Throw the plant away much to its demise? No way.The second choice, which seemed the easiest was to take it home and add it to my collection.


Having an epiphyte gives you many choices as to what to do with the plant, especially since the whole root system is intact. I decided to make a root over rock. The roots have great taper and are already exposed to air.

I had two stones handy for the root over rock. One had a kind of a shelf or lip so i decided on that one. 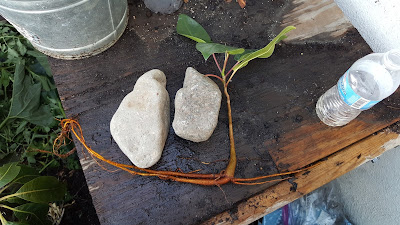 Before I did anything else I prepared the soil. I used composted soil mixed with a ground coconut husk and peat moss mix. I believe this will be stable and it will release excess moisture. 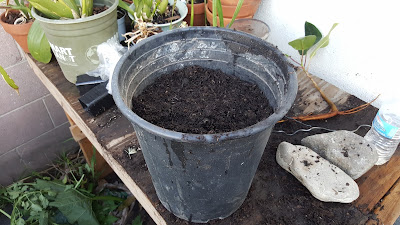 First, I fixed the tree where I wanted it to sit with rubber bands. Most of the rubber bands will be under the soil. That means that I can not check to see if they are cutting into the roots.


I used rubber bands because they will hold the plant in place and have some give for the plant to grow. 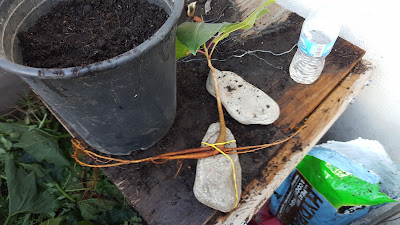 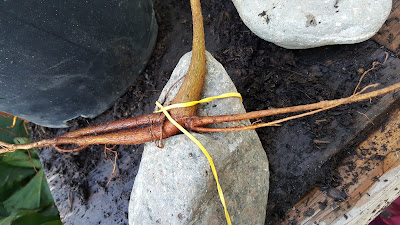 Now I start moving the roots to the position I want them to be in. I was slow and meticulous. The roots were rigid and I did not want them to break. I did try to use wider rubber bands for the roots so they can hold firm and not damage the roots. 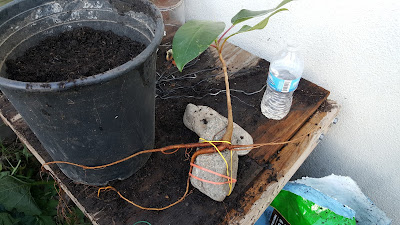 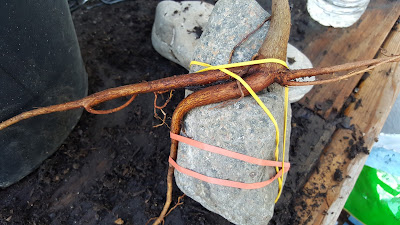 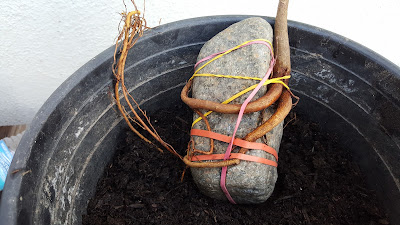 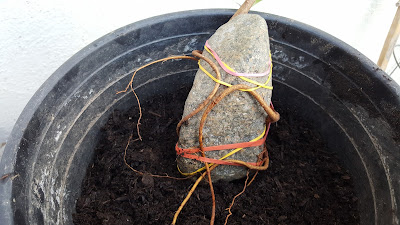 I placed the stone and tree in the dirt and added enough soil to leave the top fourth exposed. Then I pressed the soil a bit. 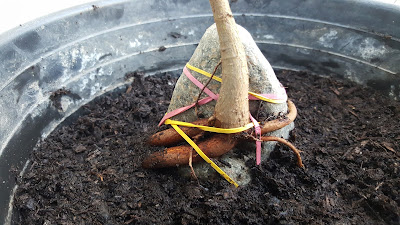 I have had the privilege of finding an epiphyte that came out roots and all once befor. I made that into a root over rock, although it is not as successful as the latest one. 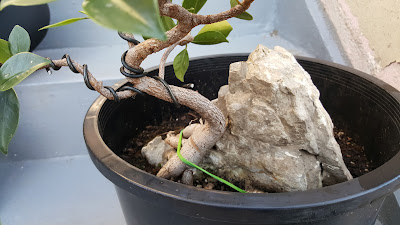 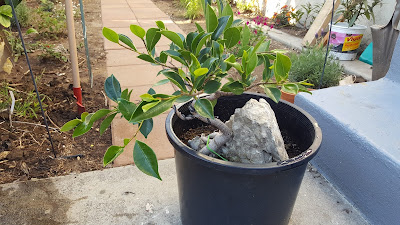 The key to a good looking root over rock, is in fact the roots. Most plants grow long tap roots. Use the tap roots for the root over rock. In bonsai we are taught to chop these roots off. However, here in root over rock the root is gold. Cheers.

The rubber bands did not hold. I have tied the tree to the rock using a zip tie. The tree did not move off of the rock much. This leads me to believe that the roots under the ground are still attached to the rock. 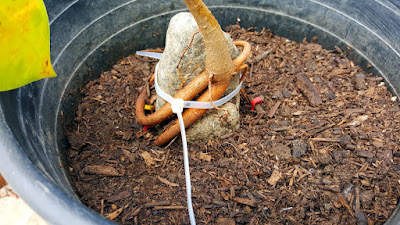 Last week I cut the terminal bud and wired the trunk. This tree was long and slender, so I decided to give it exaggerated curves. The trunk is budding along its length, and especially at the top where the leaves have grown. 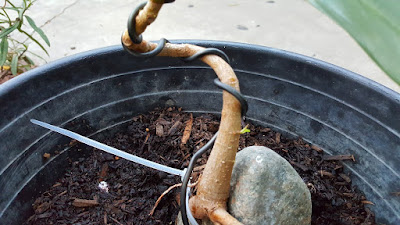 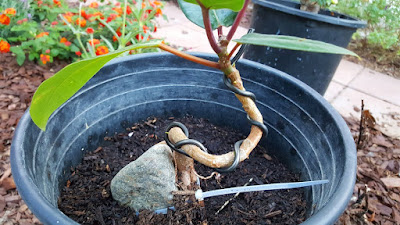 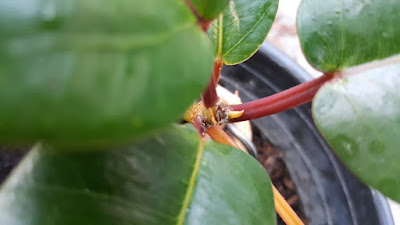 I do not know what direction the new growth will take the trees overall design, so as a rule I let them grow a good bit until I am confident of the direction the design will go.

On another note: This tree was collected from the "wild" If anybody can help me ID it I would appreciate it. There are no indigenous ficus where I live.

It has been five months since I collected this tree. It has grown so much. I still do not know what kind of ficus this is.

Its a a year and a week since I started the root over rock. I dug the roots out to see what had grown. I was very happy. 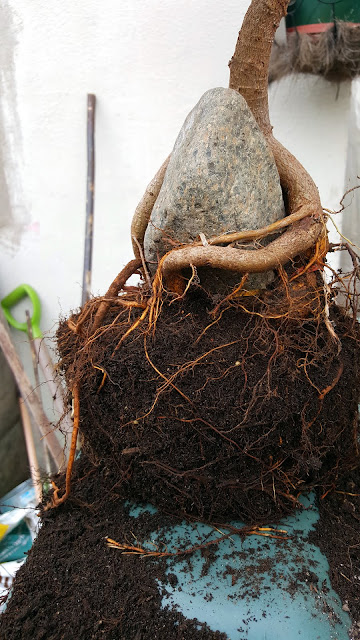 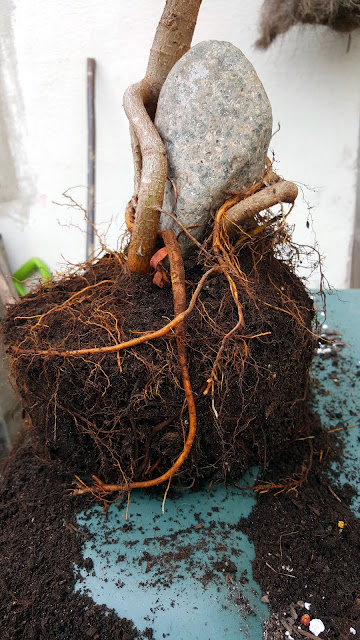 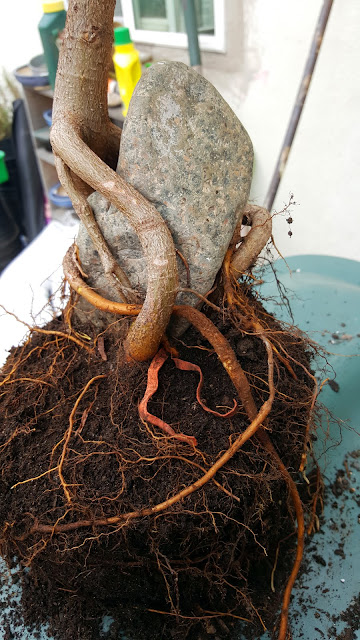 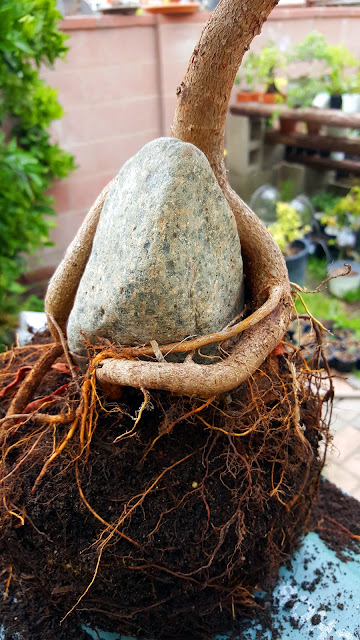 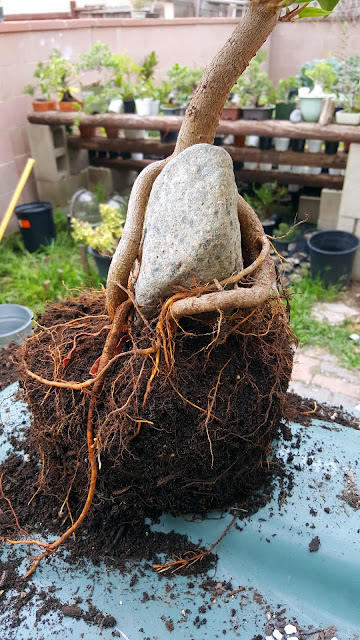 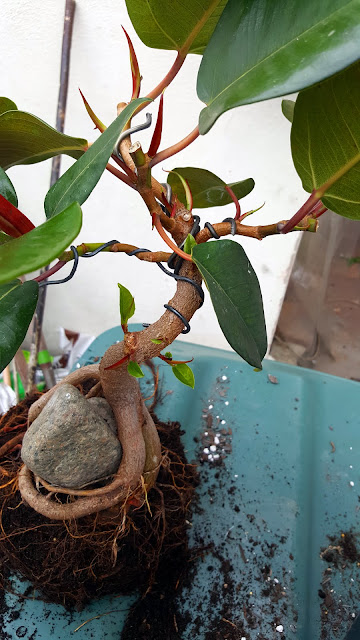 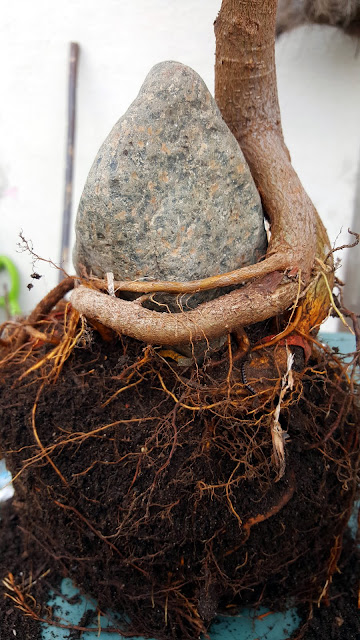 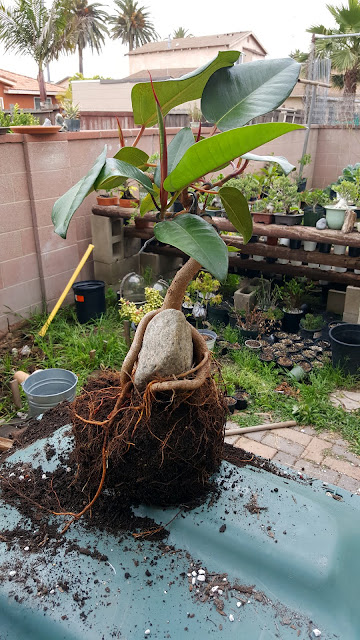 Posted by bonsai-misadventures at 8:13 PM