bad branch location on a bonsai-Ficus

What do you do when you have a massive trunk but the branches are not in the
right place?  If you are talking about a Ficus then make it bald. That's right cut off
all the branches. Do not leave anything. 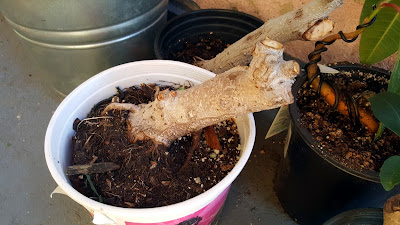 This sounds like harsh treatment, but desperate times call for desperate measures. One
day I was out collecting Ficus from where I work which happens to have a lot of pine
trees. In those pine trees, little birds deposit ficus seeds and they grow. They can get
pretty big if the landscape people do not get to them. So, one day I found a really big
tree that was as thick as my forearm, I'm not a small guy. The problem was that all the
branches were growing from one side. The side that was facing the tree had no branches. The ramification looked very bad. But the trunk was thick and one
of the hardest things to do because it takes a lot of patience is to thicken a trunk.

I tried growing it out for a while. But had no success because all the smaller branches started growing from all the bad branches. It only had bad branches, to begin with. I didn't want to throw this tree away I had collected it made it into a cutting and it was growing. It would be a
waste to throw this tree away, so I chopped off all the branches.

I had noticed when I cut the branches from another Ficus that they would sprout out
new smaller branches all over. I also noticed that if I left a longer nub of a bad branch
there would be new growth there. That would be bad as those branches would also grow
in a bad spot. So, how could I make branches grow in good spots? The only way was by
removing every branch and not leaving long nubs.

At first, I saw no new growth, and yes I was scared that I might have killed the tree.
That's always in the back of your mind. But one day I saw little buds coming out from the
tippy top of the tree which is great because I don't want branches growing just anywhere
on the tree. They all started to grow where I wanted them to. 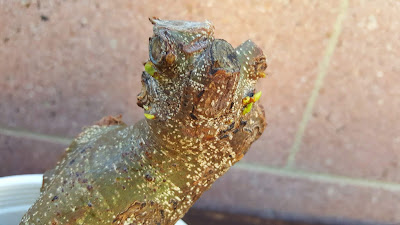 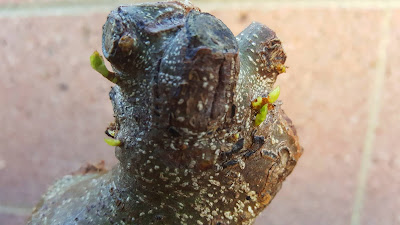 Not only were they growing where I wanted them to, but they were growing in large
quantities. So many that I had to cut some of them off because I knew that the tree really didn't need that many branches. 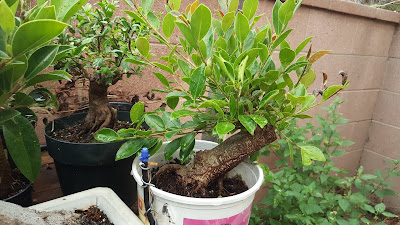 I left just enough branches so that they were in a good position, and they would have
room to grow. I wired the lower branches just to give him some shape these are going
to be my longer branches. I'm not going to prune these for a long time. In fact, I'm not going

to prune any branches until some of them get to be as thick as a pencil. The reason
I will not prune them now is that that will slow down the growth. 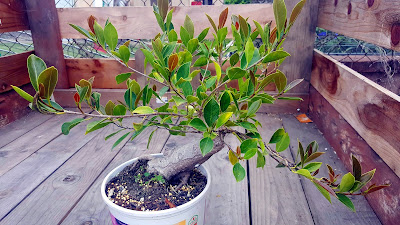 .As you can see growth is fantastic. I want those branches to grow, grow, grow.
Posted by bonsai-misadventures at 12:00 AM