Well, My brother invited me to hi house to see his new baby. While in the back yard I noticed that he had a small chinese elm growing in a planter on the side by a wall. His whole backyard is paved except along the wall. I asked him if he wanted it. It looked peculiar in its place. He told me that it was a weed and that he had hacked it many times.

I did the gracious thing and offered my services to remove the tree (my wife asks me why can’t I be normal?). He was in favor of removing it. I came back a month later and started digging the tree out.

The tree was easy to remove it was in soft soil. It had a curved tap root and two other roots that held the tree in place. The problem was that there was hardly any fine roots by the base of the trunk. All the bigger roots ran under the cement or under the wall. There was nothing to do. I sawed off the tree big roots and the tree came out no problem. 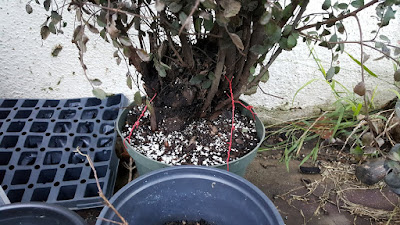 I got it home and noticed that the tree had a very bad reverse taper. Also, my brother had hacked at the tree at the same place over the last year. This forced the new growth to try and become the new leader. So the tree has five or six branches all side by side growing straight up creating a little wall. 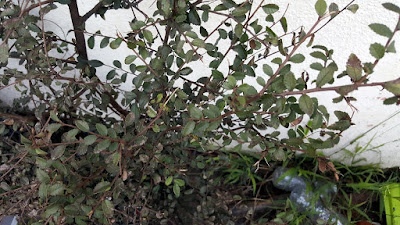 When I got the tree home I chopped off the bottom 3 inches because the taper was grotesque. I am hoping that it will grow fine roots from there. I left everything else the same. I didn't even trim the branches down. I know that if the tree lost branches they would lose them at different heights so I was willing to gamble.

It has been raining quite a bit so I have noticed only the tip of the tallest branch has wilted. Not bad at all.